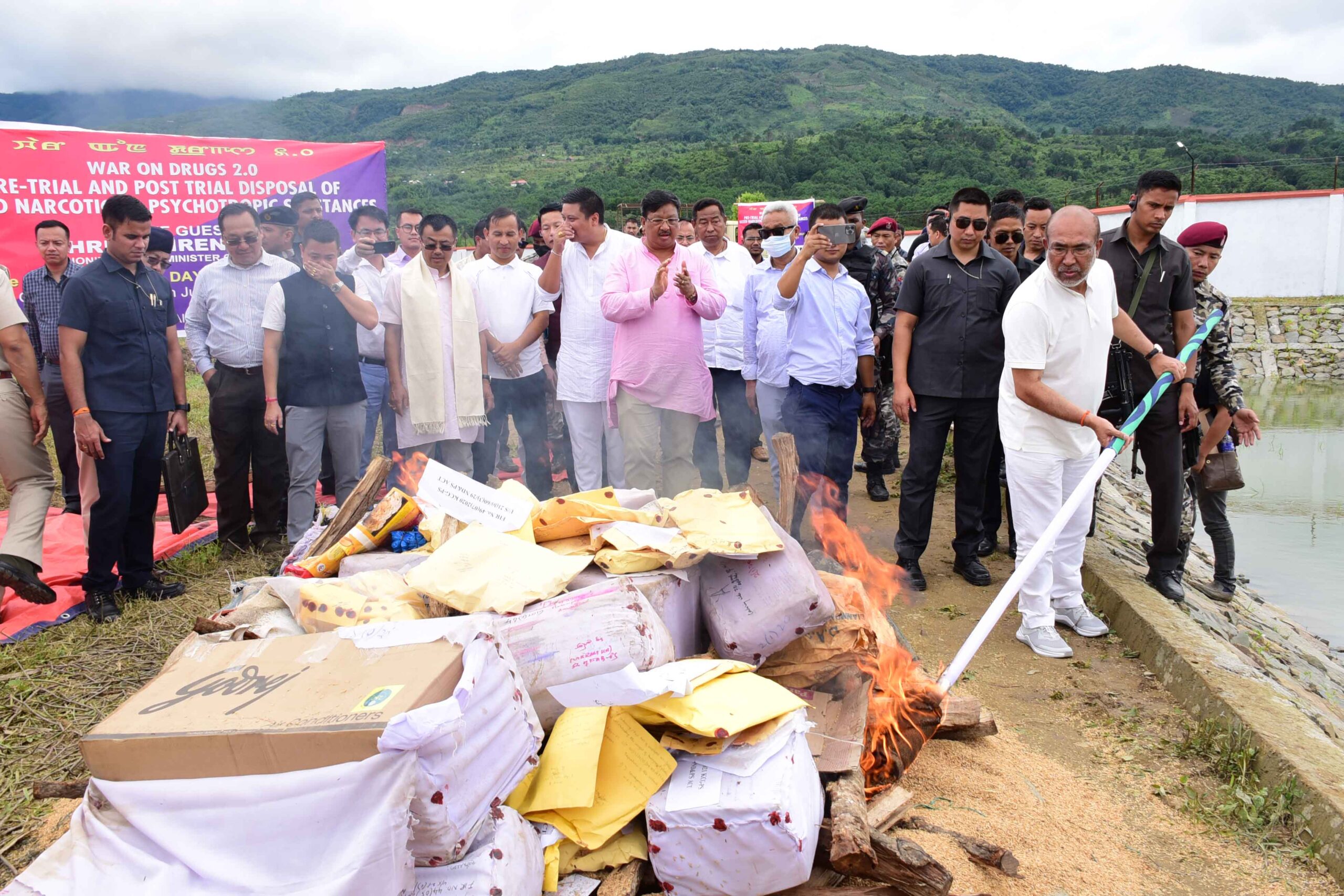 Around 3000 kg of ganja, 14 kg of heroin no. 4, 20 kg of ice drug or crystal methamphetamine, 104 kg of WY tablets, 3482 kg of SP tablets and other illegal drugs were burnt to ashes by the Chief Minister as the state observed the International Day Against Drug Abuse & Illicit Trafficking, which is annually held on 26 June.

The programme was organized jointly by the Department of Social Welfare and Police Department, Manipur.

Speaking on the occasion, N. Biren Singh stated that many unregistered rehabilitation centres are operating in the State without following proper guidelines or procedures as to how the inmates should be treated. As such, the State Government felt the need to come up with the Government-run de-addiction centre.

Stating that drug addicts shouldn’t be treated with physical punishment rather they should be given proper advice, the Chief Minister added that staff had been recruited to look after the centre considering the need to keep trained people for the same.

N. Biren recalled that the State Government’s War on Drugs Campaign was started in November, 2018 with the aim to save the youths from ill effects of drug consumption and its illicit trafficking.

He maintained that the various steps had been taken up with the Government’s motto to do something for the welfare of the people and the society. He informed that during the first term of his Government, 1674 cases related to drug activities had been registered while 2104 persons were arrested.

Maintaining that many communities had shown support to the Government’s War on Drugs Campaign, taking resolutions to uproot poppy plantation, the Chief Minister expressed his hopefulness that the State would be drug free soon.

Raising concern on the rise of the number of widows in the State and their hardship to run their families, N. Biren informed that the Government would come up with the next mission to set up various work sheds where widows could take up certain productive activities to make their own living and run their families.

He further urged the public to have respect for one another and support the welfare works taken up by the Government so that the State could progress smoothly towards development.

Social Welfare Minister Heikham Dingo, delivering his presidential address, cautioned that the State is in an alarming situation regarding drug consumption and its illicit trafficking. The ill-effects of drug menace could be widely seen nowadays and as such the State Government had started its fight against drugs to save the future of our youths. He sought support of the public stating that the efforts of the Government alone would not be enough to overcome the drug menace without the involvement and cooperation of the public.

He also stressed on the ill effects and imbalances caused by poppy cultivation on soil and environment and particularly to the health of humans.

During the programme, people of Sunusiphai submitted a memorandum to the Chief Minister which the latter assured to look into the matter including construction of playground under Khelo India, installation of street lamps at road leading to the de-addiction centre from the main road and conservation of Thambal Houbi Kom among others.