Tianwen 1 is the world's 46th Mars exploration mission since October 1960, when the former Soviet Union launched the first Mars-bound spacecraft. Only 18 of those missions were successful. 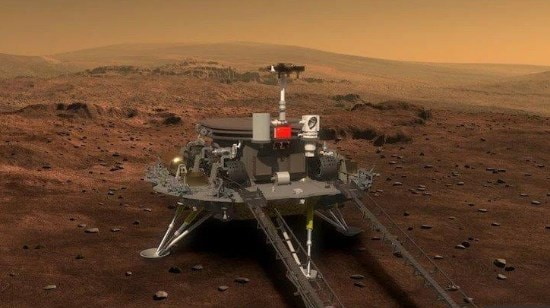 The rover — Tianwen-1 — touched down at its pre-selected landing area in the southern part of Utopia Planitia, a vast plain on the northern hemisphere of Mars, at 7:18 a.m. (Beijing Time), the CNSA announced.

It took ground controllers more than an hour to establish the success of the pre-programmed landing. They had to wait for the rover to autonomously unfold its solar panels and antenna to send the signals after landing, and there was a time delay of more than 17 minutes due to the 320-million-km distance between Earth and Mars.

The vehicle used a combination of a protective capsule, a parachute and a rocket platform to make the descent. The successful touchdown is a remarkable achievement, given the difficult nature of the task.

According to Chinese media, CNSA Head Zhang Kejian said the Mars exploration mission has been a total success.

The 5-metric ton probe, which consists of two major parts – the orbiter and the landing capsule- has flown for 215 days and about 475 million km on its journey to Mars. The average flight speed was about 100,000 km per hour.

Tianwen 1 is the world’s 46th Mars exploration mission since October 1960, when the former Soviet Union launched the first Mars-bound spacecraft. Only 18 of those missions were successful.

“Congratulations to CNSA’s #Tianwen1 team for the successful landing of China’s first Mars exploration rover, #Zhurong! Together with the global science community, I look forward to the important contributions this mission will make to humanity’s understanding of the Red Planet,” Zurbuchen tweeted.