The five agreements included one on visa waiver and setting up a seawater desalination plant, after Maldivian Foreign Minister Abdulla Shahid held talks with Wang Yi. 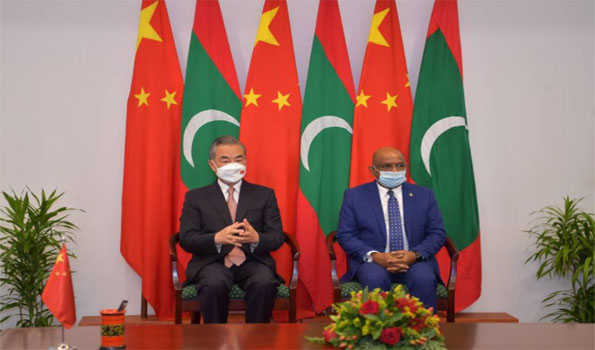 Male: The Maldives termed China as one of its “most important development partners” as the two sides inked five agreements on Saturday during the visit of Chinese Foreign Minister Wang Yi to the atoll nation, in a visit being viewed as Beijing’s determined push to widen its footprint in the geopolitically strategic Indian Ocean region.

The Chinese leader’s visit comes as Maldivian police rounded up more opposition members on Friday for participating in an “India Out” campaign, which has become louder over the last few weeks, since the release from jail last September of former president Abdulla Yameen, who is unabashedly pro-Beijing.

On Saturday, the Maldives and China unveiled an official logo commemorating the 50th anniversary of diplomatic ties.

Maldivian Foreign Minister Shahid tweeted: “Unveiled with State Councilor and FM Wang Yi, the Official Logo commemorating the 50th anniversary of diplomatic relations between Flag of Maldives and Flag of China. Diplomatic relations was established between both countries on 14 October 1972.”

The agreements inked included one on establishing a Hospital Assistance and Cooperation Programme between the Ministry of Health of Maldives and the National Health Commission of China, for extending the services of the Ophthalmic Center established in 2019 at Hulhumale Hospital by two years.

The two sides also inked a contract for the Micro-grid Seawater Desalination Project. The agreement targets the development of micro-grid seawater desalination projects in five islands in the Maldives.

They also signed a Letter of Exchange to conduct a feasibility study towards the maintenance of the China-Maldives Friendship Bridge. “The CMFB is one of the most enduring symbols of the Maldives- China relationship,” tweeted Shahid.

They inked an Agreement of Economic and Technical Cooperation on Grant Aid that will pave the way for more support to development projects from China in the Maldives, focusing on key areas such as social development, livelihoods, and infrastructure.

The two sides signed a Visa Waiver Agreement, which will allow Maldivians to travel to China on 30-day visa free basis once the pandemic restrictions are lifted.

“China is one of the most important development partners of the Maldives, and has continued to contribute to the socio-economic development of the country.

“Discussed strengthening the many areas of cooperation during Official Talks with State Councilor and FM Wang Yi,” the Maldivian FM tweeted.

Earlier he welcomed Wang Yi to Fathulla Jameel Building for the talks.

“During the Official Talks, both Foreign Minister Shahid, and State Councilor Wang Yi, discussed a whole host of issues in the bilateral and multilateral spheres, and agreed to work closely together to address shared interests, in further enhancing the close relations between the two countries.”

“Minister Shahid thanked the State Councilor and the Chinese Government, for the generous assistance it had provided to the Maldives, including the construction of the China-Maldives Friendship Bridge, the Housing Units in Hulhumale’, and the expansion of the Velana International Airport. “

Shahid also expressed his gratitude for China’s assistance in providing vaccines and other pandemic related medical supplies to the Maldives.

In commemoration of the 50th anniversary of the establishment of diplomatic relations between the two countries, the two FMs reiterated that Maldives and China will increase their cooperation both bilaterally, through economic and development cooperation, health cooperation, in international fora such as the United Nations, the statement said.

The new VIP terminal went into operation on Friday morning, and its first VIP was the Chinese Foreign Minister Wang Yi.

Wang Yi’s visit to Maldives and Sri Lanka comes following his visit to Eritrea, Kenya, and Comoros from January 4 to 7.

Maldives and Sri Lanka are a part of China’s Belt and Road Initiative (BRI) and have received loans from Beijing as part of it.

According to data, both countries are vulnerable to debt distress under the BRI. The Maldives is considered to be “highly vulnerable” while Sri Lanka is assessed to be “significantly vulnerable”.

High debt remains a problem in the Maldives as the country’s public and publicly-guaranteed debt stood at $5.6 billion at the end of March 2021. The total government debt as a percentage of gross domestic output increased from 103% in the first quarter of 2021 to 108% in the second, mainly driven by high public debt, according to reports.