Soon after he arrived from Delhi after meeting central leaders like Prime Minister Narendra Modi, Home Minister Amit Shah and National Party President JP Nadda on July 17, speculations of his continuation as chief minister were splashed all over the media. 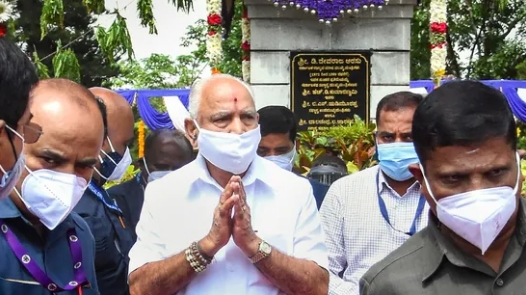 Bengaluru: Even as he is on a visit to inspect flood-hit Belagavi district, BS Yediyurappa on Sunday awaits a message from BJP central leadership, which will convey if his dreams of continuing as a chief minister are washed away or not.

As per his earlier statement to the media, Yediyurappa expects the message to come from Delhi by evening.

Soon after he arrived from Delhi after meeting central leaders like Prime Minister Narendra Modi, Home Minister Amit Shah and National Party President JP Nadda on July 17, speculations of his continuation as chief minister were splashed all over the media.

On July 17, Yediyurappa dismissed rumours about his resignation, saying not a word was discussed on the topic when he met the central leadership.

“No … This is a rumour. Not a single word was discussed on the issue by him or central leaders,” he said replying to a query that he had tendered his resignation. “There is no reason for me to hide if I had resigned,” he added.

On the contrary, Yediyurappa said Nadda had asked him to strengthen the party ahead of the 2023 state assembly elections.

From July 20 onwards, religious heads of the Veerashaiva-Lingayat community started to come out in support of Yediyurappa.

Addressing a hurriedly-held press conference in Chitradurga, Murugha mutt seer Sri Shivamurthy Sharanaru said Yediyurappa has worked for the development of people of all castes and religions equally and hence he should continue as the chief minister.

He also warned the BJP central leadership of losing the trust of Veerashiava and Lingayat communities if Yediyurappa is removed, which will have negative bearings on the party.

“Yediyurappa is a grassroots leader. He should not be removed. He has built the party from scratch,” the Murgha mutt pontiff said.

The speculations about the possibility of Yediyurappa’s replacement are rife in the wake of some disgruntled BJP leaders targeting him and his family, with accusations of corruption and interference in administration.

Yediyurappa, on July 22, broke his silence for the first time by saying he would abide by the central leadership’s decision if he is asked to quit the chief minister’s post.

He had also said that he is awaiting a message from the central leadership on July 25 and abide by it, and begin his work from the next day onwards.

Interestingly nobody knows what the message will be. All state BJP leaders have feigned ignorance on the issue of Yediyurappa’s replacement as the chief minister.

Union Parliamentary Affairs Minister Prahlad Joshi, a Brahmin leader, yesterday said he is not aware of Yediyurappa’s resignation as none of the central leaders he met spoke about it.

He also dismissed reports that he was the front-runner for occupying the chief minister’s gaddi.

Apart from Joshi’s name, CT Ravi and Arvind Bellad’s names also are cropping up in the media as probable to assume the charge if Yediyurappa is asked to quit the chief minister’s post.

Ravi is a prominent Vokkaliga leader from the Malnad region and is known for his Hindutva politics.

He shot to the limelight spearheading the Datta Peeta movement in Bababudangiri Hills. The BJP wants the peeta to be declared as a Hindu shrine.

Bababudangiri Hills is a pilgrimage centre for Hindus and Muslims as it houses the seat of Dattatreya and a Sufi dargah.

Bellad has been elected from the Hubballi-Dharwad West Assembly constituency twice. He is a popular leader in his constituency and has provided houses to the poor, which is on the lines of Modi’s housing-for-all concept.

Mines and Geology Minister Murugesh Nirani’s name is also surfacing. He is close to Amit Shah and belongs to the Panchamshali sect, the largest in the Lingayat community.

Basavaraj Bommai also is a leading contender and is a close aide of Yediyurappa. He is the son of former chief minister SR Bommai.

He also belongs to the Lingayat community and started his political career with Janata Dal under the nose of HD Devegowda and Ramakrishna Hegde before joining the BJP in 2008.

Karnataka Deputy Chief Minister CN Ashwath Narayan’s name also is doing rounds. He comes from the Vokkaliga community and is a doctor by profession.

He was chosen as the deputy chief minister for his success in wooing MLAs from Congress and JDS to form the government.

Basavaraj Yatnal, a former Union minister’s name also has cropped up. He is one of the most prominent Yediyurappa baiters in recent days.

“BJP should not ill-treat a tall leader like Yediyurappa. It should treat him with respect otherwise it may face the wrath of Lingayats. This is my personal opinion,” he said.

Yediyurappa had started his political career as Purasabha president in Shikaripura and was first elected to the Legislative Assembly from Shikaripura in 1983. He won eight elections from here.