As is done at the Green Mizoram Day function every year, Village level fire prevention awards and best contributing newspaper awards were also distributed at the program. 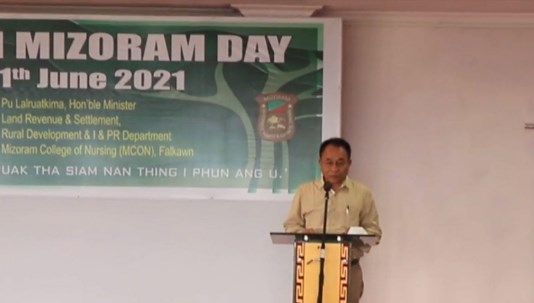 Champhai: Along with the rest of the State, Champhai District Friday observed the Green Mizoram Day 2021, the 23rd of its edition organised by the District Level Committee on Green Mizoram.

The inaugural function was held at DHO Complex, New Champhai which was attended by the Deputy Commissioner Pi Maria C.T Zuali, Chairman, District Level Committee on Green Mizoram, who kicked off the occasion. Officials, Members of  District Level Committee on Green Mizoram, NGOs and Journalists attended the event, among others.

The inaugural function was immediately followed by ceremonial tree planting, with thirteen varieties of tree saplings including State Tree Herhse (Mesua ferrea) were distributed by the nodal department for mass plantation in honour of the Green Mizoram Campaign. Total participants were recorded as 393, with 2023 numbers of saplings planted at yesterday’s event.