CBI arrested one more accused in the Bogtui massacre in Birbhum 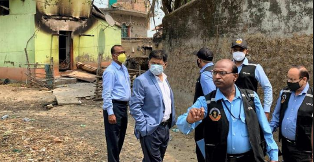 Rampurhat: The Central Bureau of Investigation (CBI) has arrested one more accused, identified as Faisal Khan alias Palash, in the Bogtui massacre.

On March 21 night, a group of frenzied people after spraying fuel set on fire to some houses at Bogtui village in which some 10 people, eight women and a minor, were burnt alive hours after TMC leader and local panchayet member Bhadu Sheikh was bombed to death near a tea stall.

Sources said in the CCTV cameras, which have some of the documents in the bomb-throwing, showed the presence of Faisal Khan at the scene of the crime, which led to the notorious massacre.

Sources said Faisal Khan would be produced before the Rampurhat court for the judicial process later on Wednesday.

The CBI probing the massacre following a Calcutta High court order already filed a charge sheet in June in which the federal agency mentioned that despite calls from the affected villagers, no one from the local police station arrived to rescue the victims.

In the 1193-page charge sheet, the CBI alleged that the local police had ignored desperate calls from the villagers while Bogtui was burning.

The charge sheet also mentioned that the attackers first locked the main door from outside before setting the houses on fire.