The statement added that Punjab Police has been informed to take necessary action. 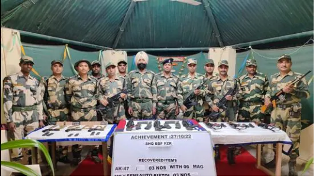 Ferozepur: Foiling attempts of anti-national elements to smuggle contraband, the Border Security Force (BSF) recovered arms and ammunition, during a search operation from near the ‘zero line’ on the Indo-Pak Border in the Ferozepur sector of Punjab.

The Public relations officer of BSF in a statement on Friday said that the BSF troops of BOP Jagdish, Ex-136 Bn, Sector Ferozepur (Distt – Ferozepur), Punjab recovered a bag during a search near the ‘zero line’ containing arms and ammunition, which included three AK 47 rifles along with six empty magazines, three mini-AK 47 rifles with five empty magazines, three Pistols (beretta) type with six empty magazines were also recovered along with ammunition, which included ¬ 200 rounds (100 rounds of the rifle, and 100 rounds of the pistol).

The statement added that Punjab Police has been informed to take necessary action.

In a similar exercise on August 23, the BSF recovered a cache of assault weapons, suspected to have been smuggled from across the border, during a patrol along the India-Pakistan border in Punjab.