Johnson resigned earlier this month as party leader, the title that also gives him the job of Prime Minister. 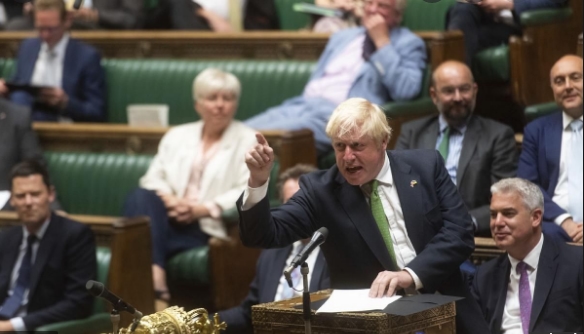 London: Lawmakers in the House of Commons, the lower house of the British Parliament, backed outgoing Prime Minister Boris Johnson’s government in a confidence vote.

Johnson’s government called for the confidence vote itself to see off a rival move by the main opposition Labour Party that could have led to a snap general election.

The government on Monday won the vote by 349 to 238, with the Conservative Party MPs rallying behind Johnson.

Johnson resigned earlier this month as party leader, the title that also gives him the job of Prime Minister.

In 2019, just months after moving into 10 Downing Street, Johnson called a snap general election, winning the Conservatives an 80-seat majority, one of the biggest successes in the party’s post-war history.

But amid a series of scandals, ranging from so-called parties at 10 Downing Street during Covid-19 lockdown to his handling of a scandal over a close ally involved in alleged sexual misbehavior, Johnson bowed to pressure to stand down.

Earlier Monday, the number of candidates in the race to succeed Johnson as party leader and the Prime Minister was reduced to four: Rishi Sunak, Liz Truss, Penny Mordaunt, and Kemi Badenoch.