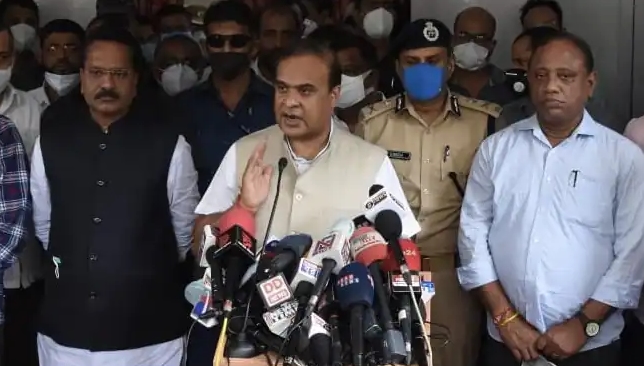 Guwahati:  The Mizoram police announced Friday that they filed a case against Assam Chief Minister Himanta Biswa Sarma and other top officials from the state over the gunfight between the police forces of Assam and Mizoram that left six Assam cops died on last Monday.

The case was filed under several sections of the Indian Penal Code, including “attempt to murder”, at the Vairengte Police Station in Kolasib district of Mizoram, which borders Assam’s Cachar, the NDTV reported.

The officers have been asked to appear at Vairengte Police Station on August 1.

The Mizoram Police issued notice for appearance to six Assam senior officials the same day Assam Police issued summons to Mizoram officials and another to the Rajya Sabha MP from Mizoram, K Vanlalvena in New Delhi in connection with the Monday clash between the two states police forces.

The two states have been at odds over the boundary for decades, but things flared up this week.

On Monday, violence broke out in the border area between these two districts, with each side accusing the other of causing the violence.

The clash flared up over an alleged construction by Mizoram in the disputed 198-square-mile stretch on the inter-state border — Lailapur under Dhalai of Cachar district in southern Assam and Vairengte in Kolasib district of northern Mizoram.

An uneasy calm prevails over the violence-hit areas now, following appeals by Chief Ministers of both the states to Union Home Minister Amit Shah.

The Central Reserve Police Force has increased its deployment in these regions, with five companies (total of 500 troops) standing between the police forces of Assam and Mizoram.

Two more companies are on a standby.