The flight had landed at the airport from Guwahati carrying 109 passengers and was to take-off for Delhi with 66 passengers. The plane was approved for departure after a thorough search by security officials, it added. 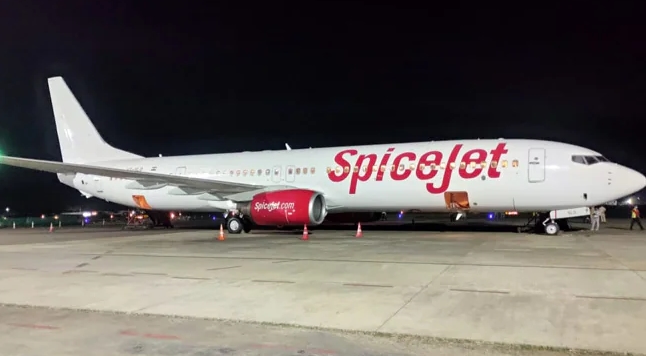 Guwahati: A piece of paper with a bomb threat message was found on a SpiceJet plane at Assam’s Silchar airport on Tuesday, the Airport Authority of India said in a statement.

The flight had landed at the airport from Guwahati carrying 109 passengers and was to take-off for Delhi with 66 passengers. The plane was approved for departure after a thorough search by security officials, it added.

“A bomb threat on flight number SG-8152 was detected at 1415 hrs at Silchar Airport on 16 March 2021. The Flt SG 8152 arrived at Silchar Airport from Guwahati and touchdown was at 1358 hrs. Considering the threat, all agencies were alerted,” the airport body said, adding the aircraft was taken to a distant bay and all passenger movement was halted as precaution, NDTV reported.

The body that oversees construction and maintenance of airports, said the slip of paper on which the threat was made was detected under a passenger seat.

“Immediately passengers were stopped from exiting the arrival lounge. Immediately the BTD team at Silchar Airport was activated, the Assam Police was also informed. The state government, the concerned SP also arranged the security check-up,” it said, adding the checking was completed at around 6.30 pm.

“The aircraft was halted at the bay immediately considering the bomb threat and all passengers were taken to the terminal building. After having all the mandatory security checks and SoPs followed, the BDDS team cleared the aircraft fit for flying, and it was throughout checked. At 1830 hrs, the flight was still at bay, and after meeting with the agencies, we decided to resume the services of the said flight,” PK Gorai, the Airport Director, was quoted as saying in the statement.

All operations at the airport are normal, he added.

This comes as Assam is gearing up for a three-phased assembly election starting March 27.