BJP to celebrate 3rd anniversary of Tripura govt amid dissidence

Although three years rule of BJP led by Chief Minister Biplab Kumar Deb has utterly failed to comply with the poll promises made before the last assembly elections. 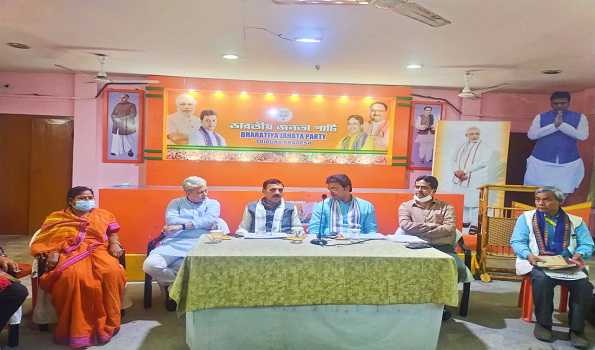 Agartala: Amidst uncertainty over continuing alliance with IPFT and large scale dissidence in the party leadership, BJP led government in Tripura will celebrate its third anniversary in a mega event on March 9 next, which is scheduled to be addressed by Prime Minister Narendra Modi virtually.

Demonstrating the unity among the leaders in the central rally on the third anniversary here is becoming important for BJP, as the three years rule of the party in Tripura becomes the centre point of the poll campaign in neighbouring Assam and West Bengal. Language, culture and traditions are similar both the poll-bound states with Tripura and all the parties referring to the experiences hereunder BJP rule.

Although three years rule of BJP led by Chief Minister Biplab Kumar Deb has utterly failed to comply with the poll promises made before the last assembly elections. Besides large-scale corruption, anti-people decisions of the administration, vindictive action against the people who raised questions against the Chief Minister even in social media and deteriorating law and order, BJP workers in the state have now become hostile against the government for not doing anything they had promised.

However, BJP state president Dr Manik Saha said the party’s state in-charge Vinod Sonkar arrived here last morning on a two-day visit to finalise the programme of third-anniversary celebration besides, several organisational issues. While the state government will host the central rally at Vivekananda Stadium, the party would soon announce it’s program at the constituency and Mandal level.

“During Sonakaji’s visit, we had separate meetings of the party core committee, state committee, district-level leaders and leaders of all the party wings on organisational issues. The matter of continuing alliance with IPFT will also likely be decided, as they have already announced their support to royal scion Pradyot Kishore Doberman’s party,” Dr Saha said.

He, however, claimed that the BJP led government has achieved many milestones fighting against a series of odds in the last three years but many things are yet to be done. In the celebration of the third year in power, a road map to fulfil the unfinished tasks of the government will be unveiled because the party wants to prepare for the next assembly elections with a handful of success stories.

Besides, the election in West Bengal and Assam, Tripura is also holding tribal areas autonomous district council (ADC) poll in early next month followed by elections to urban local bodies, which are very crucial for the party, Dr Saha said adding, “BJP will fight with a single command to achieve the targets even if there are any differences of opinion within the party. We shall not allow opposition parties of any foul play in the upcoming elections.”

He further mentioned that the success stories of Tripura under BJP’s rule in three years have already been shared with the party central leadership and these will be used in poll campaigns of five states.

However, he argued overcoming the difficulties of 25 years long communist rule in three years is not easy but there has been a qualitative change in the administration and mindset of the people.

Tokyo: The embassy of Japan in Ukraine will resume its work in Kiev on Wednesday after a seven-month pause,...
World