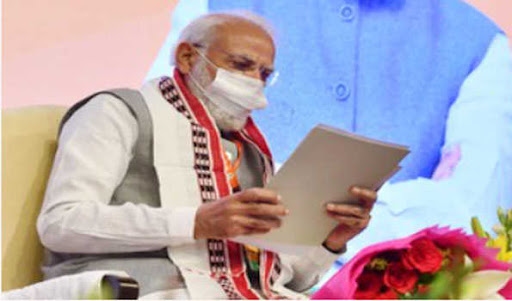 New Delhi: With eyes on the upcoming Assembly polls, the National Executive of BJP met in the national capital and vowed to win elections in five states of Uttar Pradesh, Uttarakhand, Goa, Manipur and Punjab.

A political resolution was presented by the Uttar Pradesh CM and seconded by Tamil Nadu BJP chief K Annamalai.

The resolution talked about the upcoming polls, and vowed to win all five states. It said that the surveys were also indicating in this direction.

BJP is in power in four of the five poll bound states – Uttar Pradesh, Uttarakhand, Goa and Manipur. Presentations were made by Chief Ministers of these states, who talked about the achievements of the government, and preparations for the polls.

Punjab BJP Chief Ashwini Sharma also made a presentation, and said that the party will fight on all seats in the state. The BJP parted ways with alliance partner in Punjab Shiromani Akali Dal last year after the new Farm Laws were passed.

Former Punjab chief minister Captain Amarinder Singh, who quit the Congress and has announced formation of a new party – Punjab Lok Congress, had said he would ally with the BJP if the farmers’ protests are resolved.

West Bengal, where the BJP lost to Trinamool Congress in the recent assembly polls featured in the discussions, as the party in its political resolution condemned the post poll violence in the state, and pledged to fight legal battles and support its workers in the state.

Nadda also mentioned West Bengal in his opening address, and said the BJP has registered fastest ever growth in the state, from having hardly any vote share in 2016 assembly polls, to getting 38 percent vote share in 2021 state elections. In 2016 BJP polled around 10 per cent votes in the state polls.

Nadda also talked about southern states, and said Huzurabad bye-poll results showed the party is going strong in Telangana. He called for strengthening the party in Andhra Pradesh and Odisha to win the next assembly polls, and talked about opposing “appeasement politics” of the state government in Kerala.

With eyes on the upcoming polls, the party is also strengthening the organisation and booth level committees would be formed across 10,40,000 polling booths in the country. Nadda said while 85 per cent committees have already been formed, rest would be formed by December this year.

By April, 2022, the party plans to form ‘Page Committees’ to manage every single page of voters’ lists at different polling booths.

The political resolution also talked about abrogation of Article 370 from Jammu and Kashmir, and about the recent visit of Home Minister Amit Shah to the state.

Nadda also reached out to the Sikh community, and listed a number of measures taken by the Modi Government, including expediting action against 1984 riots accused, facilitating foreign grants to gurudwaras and keeping langars outside the review of the Goods and Services Tax (GST).

Prime Minister Modi, in his address at the conclusion of the meeting, called upon the workers of BJP to become ‘a bridge of faith’ for the common man. The party also criticised the Opposition and accused it of doing “petty politics” during the Covid-19 pandemic. It lauded the management of the pandemic by the government.