In the 51 kg semi-final, Bishwamitra on Friday continued his rich form and made light work of Tajikistan’s Abdurakhmonzoda Akarali on his way to the final. 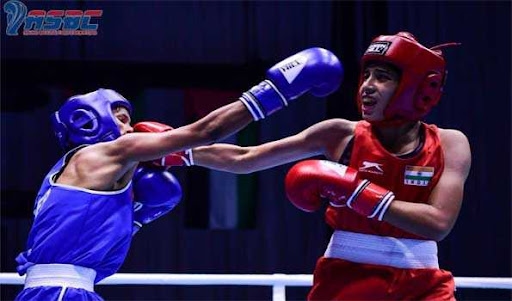 In the 51 kg semi-final, Bishwamitra on Friday continued his rich form and made light work of Tajikistan’s Abdurakhmonzoda Akarali on his way to the final.

The sharp and diminutive Indian boxer displayed his speed and skill throughout the bout and played on the counter to secure an easy 5-0 win. He will face Kuziboev Ahmadjon of Uzbekistan in the final.
In the light-flyweight semi-final, Vishvanath Suresh (48kg) was up against Brunie’s Sayed Fadel.

The Indian boxer had a tough start in the first round but after gauging his opponent’s strategy, he came back strongly in the remaining rounds and played from a distance to convincingly win the bout 5-0. He will square off against Kazakhstan’s Sanzar Tashenbay in the final.

In one of the closest semi-final bouts of the day, Jaydeep Rawat (71kg) faced Murasebekov Bekbol of Kyrgyztan. The bout witnessed a lot of mighty blows from both sides and a lot of clinching in what was a high intensity attacking affair.

Throwing caution to the wind, India’s Jaydeep decided to go for all out attack in the last round and landed more clear punches to nail a 3-2 split victory. He will face a tough challenge from Abdullaev Alokhon of Uzbekistan in the final.

On the other hand, Deepak (75kg) suffered a 1-4 defeat against Kazakhstan’s Bakbergen Aliaskarov in the semi-final.
In the 70kg women’s semi-final, Lashu Yadav lost 0-5 to Gaukhar Shaibekova of Kazakhstan.

With Vishvanath, Bishwamitra and Jaydeep entering the final, India will now have five men fighting for gold in the youth men’s section. Vanshaj (63.5kg) and Vishal (80kg) have already secured their place in the final.
Meanwhile, Daksh (67kg), Deepak (75kg), Abhimanyu (92kg) and Aman Singh Bisht (92+kg) settle for bronze after ending their campaign in the semis.

Meanwhile, Lashu Yadav (70kg) bagged the bronze medal.
All the final matches in the junior category will take place on Sunday and the youth finals will be played on Monday.