The result stretches BFC’s winless run to six matches and further extends ATKMB’s run to four games without a win. 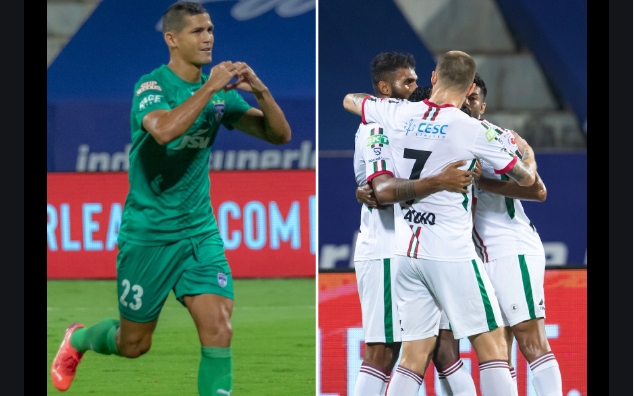 The result stretches BFC’s winless run to six matches and further extends ATKMB’s run to four games without a win.

Subhasish Bose (13’) broke the deadlock early on with a well-placed header before Cleiton Silva (18’) scored from a penalty to level the score. Danish Farooq (26’) scored his first-ever goal in the competition to send the Blues into the lead but Hugo Boumos (38’) turned up to draw level for the Mariners. Roy Krishna (58’) also got on the scoresheet as he converted a second-half penalty but Prince Ibara (72’) equalised with his second goal of the season.

Sunil Chhetri started from the bench while Ashique Kuruniyan was slotted in a more offensive role. ATK Mohun Bagan started on the front foot and had a goal disallowed for offside in the first seven minutes. Following sustained pressure, Subhasish Bose gave his team the lead after connecting with a corner and heading the ball past Gurpreet Sandhu.

Within a few minutes after conceding the goal, BFC was awarded a third penalty of the campaign when Liston Colaco brought down Cleiton Silva inside the box. The Brazilian stepped up and calmly converted from the spot to bring the game to level terms.

Just before the half-hour mark, the scorer then turned provider as Danish Farooq found the back of the net with a header from Silva’s corner for his first-ever goal in the Hero ISL. Post the drinks break, ATKMB scored against the run of play with Roy Krishna feeding Hugo Boumos with a perfectly weighted through pass and the attacker effortlessly scored with his left foot by slotting the ball past the advancing goalkeeper.

A yellow card each was shown to Ajith Kumar and Hugo Boumos before the teams went into the break. The second half got off to a more cautious start from each side. Referee Crystal John saw an infringement in the box by Prince Ibara and awarded a penalty to ATKMB which was easily scored by Roy Krishna just before the hour mark. The villain then turned hero as Ibara scored with a powerful header from a corner taken by Roshan Naorem.

A flurry of attacking opportunities, mainly from set-piece situations from both teams was created but the tie was settled at three goals each. Four minutes were added after the regulation period but neither team deserved to lose and shared the points after a great contest.

Bengaluru FC will now face an in-form Jamshedpur FC on Monday at the Athletic Stadium while ATK Mohun Bagan plays struggling NorthEast United FC on Tuesday at the PJN Stadium.