Bengal’s daughter in the saddle for third time

After a phenomenal victory in the Assembly polls, Trinamool Congress (TMC) spremo Mamata Banerjee on Wednesday was sworn in as West Bengal Chief Minister for third consecutive term . 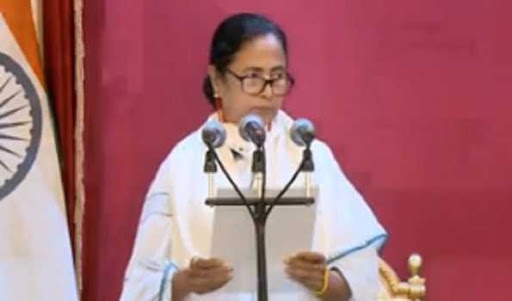 Kolkata: ‘Nation’s Didi’ Mamata Banerjee, the firebrand leader of West Bengal politics, once again proved a master strategist, decimating the Bharatiya Janata Party (BJP) and new Congress-Left-ISF alliance christened as “Samyukta Morcha” all of whom sought to checkmate her return to power.

After a phenomenal victory in the Assembly polls, Trinamool Congress (TMC) spremo Mamata Banerjee on Wednesday was sworn in as West Bengal Chief Minister for third consecutive term .

Defeating all odds, the 66-year-old feisty leader, who had single-handedly wrecked the red bastion in West Bengal in 2011 ousting Left Front’s uninterrupted 34-year-old rule, coasted to a two third majority in this year election, winning 213 seats, bettering its performance of 211 in the outgoing Assembly.

The ‘daughter of Bengal’ also faced an all out attack by BJP which fielded top party stalwarts led by Prime Minister Narendra Modi, Amit Shah, J P Nadda a battery of Union Ministers and state leaders for campaigning but they finally found that there was no way to stop her Trinamool Congress from romping home to victory.

It is the Bharatiya Janata Party that trespassed her dominion after gaining overwhelming results from the state in the 2019 Lok Sabha polls. And, the emergence of the Left-Congress-ISF alliance has made the situation more complicated for her.

Ms Banerjee is serving as the 8th and current Chief Minister of West Bengal since 2011, the first woman to hold the office.

She founded the All India Trinamool Congress (AITC or TMC) party in 1998 after separating from the Indian National Congress, and became its first chairperson. She is often referred to as Didi by her followers and as Pishi (meaning paternal aunt in Bengali) by many of her critics.

Ms Banerjee previously served twice as Minister of Railways, the first woman to do so. She is also the first female Minister of Coal, and Minister of Human Resource Development, Youth Affairs and Sports, Women and Child Development in the cabinet of the central government.

She rose to prominence after opposing the erstwhile land acquisition policies for industrialisation of the Communist government in West Bengal for Special Economic Zones at the cost of agriculturalists and farmers at Singur.

In 2011 Banerjee pulled off a landslide victory for the AITC alliance in West Bengal, defeating the 34-year-old Communist Party of India (Marxist)-led Left Front government, the world’s longest-serving democratically elected communist government, in the process.

She has also been credited for setting up of the Gorkhaland Territorial Administration.

In the 2016 assembly elections, All India Trinamool Congress won with a landslide two-thirds majority under Mamata Banerjee winning 211 seats out of total 294, who has been elected as Chief Minister West Bengal for the second term.

All India Trinamool Congress won with an enhanced majority contesting alone and became the first ruling party to win without an ally since 1962 in West Bengal.