BSF claimed the deceased Bappa, a Bangladeshi cattle smuggler and was involved in a series of cattle smuggling incidents in northern parts of Tripura. After all formalities, the body has been handed over to BGB in the afternoon. 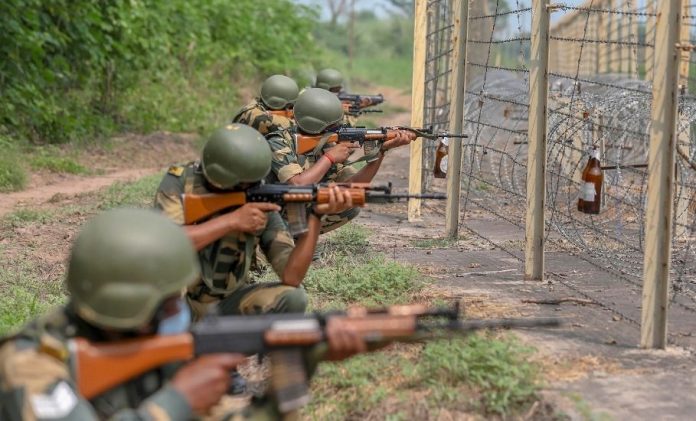 Agartala: The BSF troops gunned down a Bangladeshi citizen identified as Bappa Miyan (32), a resident of the east of Batoli under Juri police station of Moulvibazar district last night along the Indo-Bangladesh border in North Tripura.

BSF claimed the deceased Bappa, a Bangladeshi cattle smuggler and was involved in a series of cattle smuggling incidents in northern parts of Tripura. After all formalities, the body has been handed over to BGB in the afternoon.

According to the report, BSF jawans had to use Non-lethal firearms as a last resort in self-defence when trans-border criminals continued to pose challenging the border guards on the intervening night of March 19/20. The jawans had observed 12-15 smugglers with cattle heads approaching wire fence from the India side and 10-12 smugglers coming from Bangladesh sided in Yakubnagar border outpost of Dharmanagar.

BSF release here said on being challenged by the BSF troops, smugglers on both sides started pelting stones on BSF party while a few of them started cutting the wire fencing from the Bangladesh side. Subsequently, the smugglers on the Indian side came very close to a BSF Jawan and attacked him with sharp cutting weapons.

The Jawan had a narrow escape and he saved himself by taking cover of a fencing gate but smugglers encircled him. Sensing danger to his life, BSF Jawan fired two rounds from Pump Action Gun in self-defence, resultantly one of the smugglers on Bangladesh side of the wire fence got hit and fell on the ground but the rest of his gang on both sides fled away taking advantage of darkness, BSF release stated.

The involvement of Bappa Miyan in trans-border crimes has been regularly shared with BGB from the BSF side. During thorough checking of the area, the party detected a wire fence breach and recovered one Fence Cutter, other sharp arms and one cattle were recovered near the dead body.