Speaking on the occasion, John Longkumer said that the National Flag rally run organised by the Nagaland Police was held as part of the 75 years of India’s Independence (Azadi Ka Amrit Mahotsav) celebration. 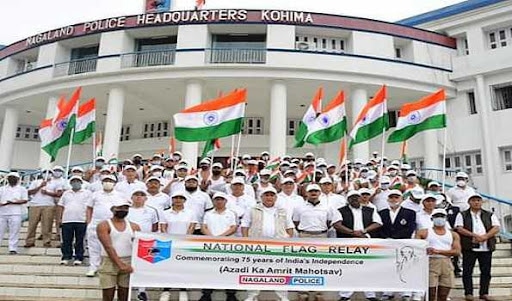 Kohima: The culminating programme of the National Flag Rally is commemorating 75 years of India’s Independence (Azadi Ka Amrit Mahotsav) celebration was graced by the Director-General of Police Nagaland John Longkumer at the Police Headquarters here today.

Speaking on the occasion, John Longkumer said that the National Flag rally run organised by the Nagaland Police was held as part of the 75 years of India’s Independence (Azadi Ka Amrit Mahotsav) celebration.

He added, the Azadi Ka Amrit Mahotsav was launched on 12 March this year nationwide and in our state too, it was launched on 12th March last at the Secretariat Plaza in Kohima by Nagaland Chief Minister Neiphiu Rio.

Longkumer said that the word Azadi Ka Amrit literally means the nectar of freedom, and mentioned that Prime Minister Narendra Modi while launching the programme has described it as the ‘Elixir of the Energy of Freedom’, the nectar of inspiration from the freedom fighters, nectar of new ideas, new resolutions and total self-reliance which would be an inspiration for the new generations to come.

He also said that through the programme, we pay homage and respect to the freedom fighters of our nation for their personal sacrifices, their spirit of unity and their love for the nation during the 200 years of British colonial rules. In our state too, he said that Haipou Jadonang of Nagaland anticipating for freedom of his people from the clutches of the British colonial rule, revolted against the British but on 19 February 1931 at the age of 26 years he was arrested on charges of seduction and hanged thus becoming a martyr in India’s struggle for India independence.

Longkumer in his speech also described that the Indian freedom movement as the most remarkable in history as it was succeeded as a non-violent movement through Mahatma Gandhi, who spread headed the final pace of India’s struggle for independence which today is regarded as the most propagate of peace. Pay homage to the freedom fighters, he added that we realise that their sacrifices have secured our future of hope, prosperity, development and unity. He said the need for unity is more accurate now as we not only combat the devastating forces that want to tear us apart but combat common enemies which seek to devour us more.