Police arrested Tetsuya for allegedly attempting homicide and are interrogating him. 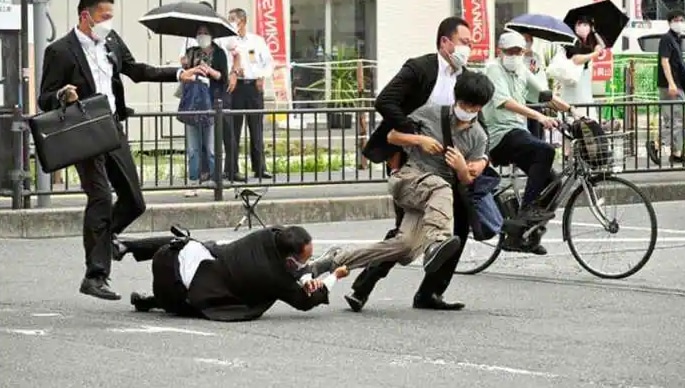 Tokyo: Former Japanese Prime Minister Shinzo Abe is showing no vital signs after he collapsed on the street on Friday after being shot at in the western city of Nara. Police arrested a man on suspicion of attempted murder and retrieved a gun.

The man in custody is 41-year-old Yamagami Tetsuya, police said adding that they seized the gun which the suspect was apparently holding.

Abe was transferred by medevac to Nara Medical University Hospital in Kashihara City. Police said Abe appears to have been shot from behind.

The fire department said he is in cardiopulmonary arrest, nhkworld reported.

Abe was making a speech for an election campaign for a Liberal Democratic Party candidate in Nara City when he collapsed around 11.30 a.m. local time and was rushed to a hospital.

Police arrested Tetsuya for allegedly attempting homicide and are interrogating him.

The NHK report earlier confirmed Abe was bleeding and at least two gunshots were heard near the Yamatosaidaiji Station, where the former prime minister was campaigning before the Upper House election scheduled on Sunday.