Assam: When a senior scribe named and shamed in social media

Luit Kumar Barman also accused him of carrying out many other fraudulent activities with the advantage of being a media person. 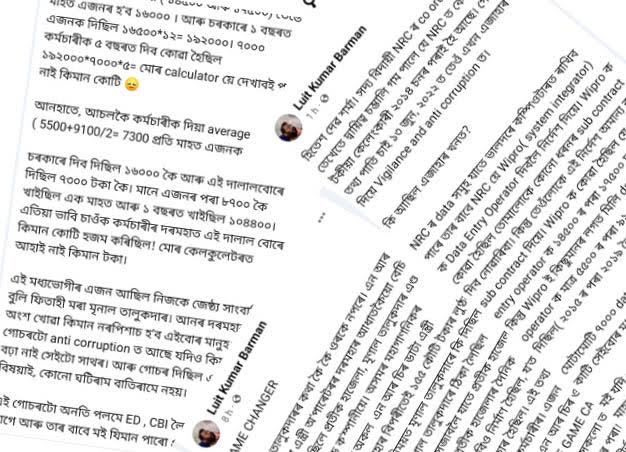 Guwahati: If a senior scribe is named and shamed in social media as a scam star, should or should not he respond to it? Moreover, when a particular social media post (following up with a series of posts on the same television journalist) is liked and shared by thousands of non-media persons, can he ignore it for a long time? Does it mean that the said Assamese satellite news channel anchor has silently admitted his involvement in the multi-crore rupees scam during the updation of 1951 National Register of Citizens (NRC) in Assam of northeast India during 2015 to 2019? Needless to mention that the whistle blower expresses his willingness to face any lawsuit over the matter.

Many such questions surfaced when a Guwahati-based film producer claimed in one of his recent facebook posts that a television talk show host was a beneficiary of financial irregularities in the updation process of Assam NRC.

Luit Kumar Barman, introduced as the producer of Boomba Ride (selected for Indian Panorama and the country’s official selection to Cannes Film Festival), also accused him of carrying out many other fraudulent activities with the advantage of being a media person. Needless to mention that Barman, who has 4900 facebook friends and over 21000 followers in social media, is welcomed by thousands for his brave revelation.

Lately, a forum of nationalist citizens has demanded that the draft Assam NRC should be reverified completely as the immediate past NRC State coordinator Hitesh Devsarma publicly stated that it excluded thousands of indigenous families and included millions of illegal citizens. Moreover, the Patriotic People’s Front Assam (PPFA) asserted that Devsarma in two separate official complaints had alleged that faulty software was used in the process and a huge financial scam had taken place, which was also observed by the Accountant General of Assam in a provisional audit  report.

The NRC authority spent a sum of Rs 1600 crore in the four-year long process, where a large number of temporary workers (along with nearly 50,000 government employees) were also engaged as data entry operators DEOs. The system integrator (Wipro Limited) had the responsibility to supply DEOs, but it allegedly engaged sub-contractors, where some media persons were also involved. Wipro was sanctioned Rs 14,500 (to 17,500) per DEO per month by the NRC authority, but the subcontractors paid only Rs 5,500 (to 9,100) to each DEO every month.

“It is unfortunate that around six thousand DEOs were denied even the minimum amount as per the country’s basic minimum wage. The DEOs, some of whom approached the State labour commissioner, and many came to the street demanding their dues, are still deprived of their full payments (which may be Rs 100 crore in total),” said a PPFA statement adding that the part time workers should be paid the outstanding amount of money as early as possible. The forum strongly argued that for anybody’s greed those DEOs must not be deprived of their legal dues.

There was speculation that at least three city-based news channel editor-journalists were involved in the NRC updation financial irregularities. It is understood that a large sum of money, meant for the DEOs, were fraudulently grabbed by those television anchor-journalists. Needless to mention that, during the period of NRC updating process, they tried to project the then NRC State coordinator Prateek Hajela as an extraordinary bureaucrat (read a superhero).

Moreover any report against the process was discouraged by these contractor journalists terming it as a fit case for defamation (because the NRC process was monitored by the apex court of India).

As the businessman turned filmmaker disclosed the illegal activities of the scribe bluntly, he went on hibernation. Even the great communicator was contacted by an email for his response over the matter, but the usually talkative journalist remained silent for days.

Even in a later post, Barman narrated about a book titled ‘The Game Called NRC’, which was penned by the tainted media person with a shower of lavish praises for Hajela because of his hard work, probably to help the IAS officer to apply for some reputed national awards. Nonetheless the outspoken scribe has not broken his silence till now!