“It is high time that the matter be settled for all concerned and it will be munificent of your good offices to order an investigation by the CBI to bring out the truth,” Bbora stated in the memorandum. 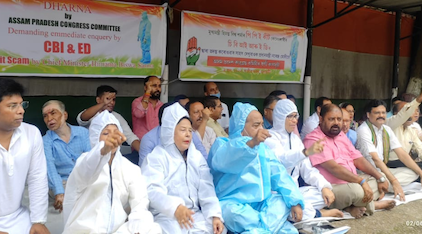 Guwahati: Assam Trinamool Congress chief Ripun Bora has written a letter to Prime Minister Narendra Modi seeking a CBI probe into the allegations of a ‘scam’ in the procurement of PPE kits and sanitisers in the state during COVID times in 2020.

“Even as the nation dealt with the unprecedented emergency of the COVID-19 pandemic in 2020, it became an opportunity for the health department of the BJP-led Assam government to hand over ‘urgent’ medical supply orders to companies owned by the then health minister Shri Himanta Biswa Sarma’s wife Riniki Sarma Bhuyan and Sarma’s ‘business friend’ Ashok Dhanuka’s son Ghanshyam Dhanuka, for their own benefit,” Assam TMC chief Ripun bora said in the letter to PM Narendra Modi.

“It is high time that the matter be settled for all concerned and it will be munificent of your good offices to order an investigation by the CBI to bring out the truth,” Bbora stated in the memorandum.

“As per the Government of India’s Code of Conduct for ministers (both Union and State), all State and Union ministers are to ‘ensure that the members of his family do not start, or participate in, business concerns, engaged in supplying goods or services to that Government (excepting in the usual course of trade or business and at standard and market rates) or dependent primarily on grant of licenses, permits, quotas, leases, etc. from that Government; and report the matter to the Prime Minister, or the chief minister as the case may be, if any member of his family, sets up, or joins the conduct and management of any other business.

“My family has donated PPE kits to the government of Assam at that point of time. And no business transaction has happened and not a single penny has been paid to any of the companies or individuals who are part of my family.”

Sarma also hit out at the corruption accusation against his wife Riniki Bhuyan Sarma, and said, “Inspite of Assam government duly acknowledging that this was a gift and we are thankful..that letter my wife has already mentioned in her tweet…you can make any kind of account-checking whether that company has been paid a single paisa from the state government .. If anybody can prove that, I’ll be very happy”.