The five CIT students were detected positive on Thursday during the Rapid Antigen Test at the RNB Civil Hospital in Kokrajhar following which the entire campus was declared a containment zone and sealed until further notice, the PTI reported. 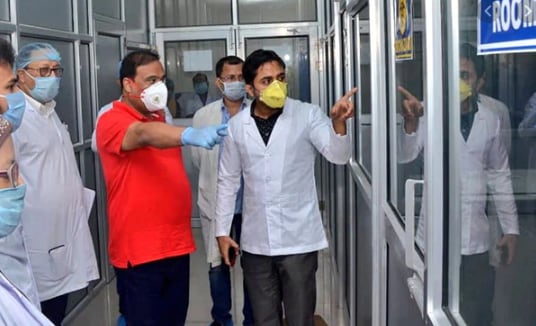 Guwahati: Assam reported 27 new Covid-19 cases, including five students of Kokrajhar’s Central Institute of Technology (CIT), during the last 24 hours, taking the total total cases to 2,17,454, according to official sources on Thursday.

The five CIT students were detected positive on Thursday during the Rapid Antigen Test at the RNB Civil Hospital in Kokrajhar following which the entire campus was declared a containment zone and sealed until further notice, the PTI reported.

The district authority will monitor for the next two- three days and the B Tech examination for the fifth and final semester, which was scheduled to be held from the first week of March has been postponed. A new date will be announced later on, the dean in-charge of student affairs Bihung Brahma said.

Out of the students who tested positive, three are from Cooch Behar in West Bengal, Meghalaya and Tripura while two students are from Assam’s Dibrugarh and Kamrup Metro districts, the officials said adding they had reached their hostels few days ago before the March 1 semester examination.

Kokrajhar district magistrate Bhaskar Phukan in the order said that as per the Assam Covid-19 Regulation order, the protocol of Covid -19 is being strictly enforced from 6 pm of February 24 until further order.

He said that all the steps were taken for the treatment of the students who tested positive.

Meanwhile, according to a bulletin issued by Assam’s National Health Mission the toll due to the contagion remained 1091 as there have been no fresh fatality.

The state currently has 259 active cases while 25 patients were discharged during the past 24 hours. A total 24 2,14,757 patients have recovered so far, it said.

The first dose of COVID-19 vaccine was administered to 4,060 health workers and the second dose to 5,673 beneficiaries during the day. Atotal 5,884 frontline workers received the first dose at 383 session sites, the bulletin said.

There was no case of Adverse Effect Following Inoculation during the day, it added.