During her second day of the visit, Gandhi visited a tea estate in Biswanath Chariali district and interacted with the women workers in tea gardens. 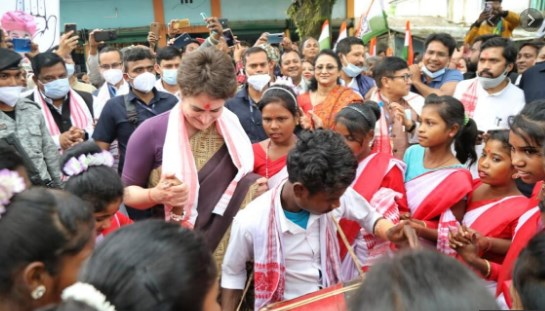 During her second day of the visit, Gandhi visited a tea estate in Biswanath Chariali district and interacted with the women workers in tea gardens.

“Tea garden workers and lives are an example of simplicity and truth. I will fight for your rights and raise voice at every forum,” Gandhi said donning the local outfit in her effort to attract tea garden voters.

She further said that tea garden workers are the assets of Assam and the nation.

“The Congress party will always fight to protect and promote them,” Gandhi said.

Gandhi will later address a rally at Tezpur in neighbouring Sonitpur, another tea hub district.

Votes of tea garden workers, owners will be a crucial factors in at least 40 of Assam’s 126 Assembly seats.

Her visit comes days after the BJP-led government in Assam hiked the daily wage of the tea garden workers by Rs 50 from Rs 167 to Rs 217.

Former Congress President Rahul Gandhi also promised that Congress would hike the tea garden wages to Rs 365 if it is voted to power in Assam.