The agreement between the states was announced by Assam Chief Minister Himanta Biswa Sarma and said that an understanding has been reached to immediately withdraw states’ forces from border locations. 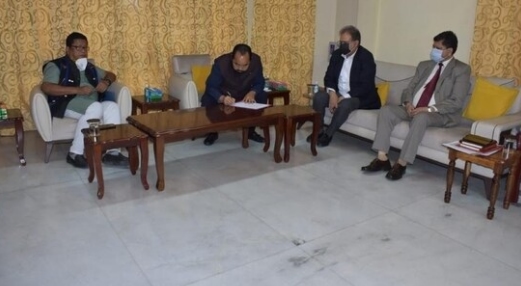 Guwahati:  In a major breakthrough towards de-escalating tensions at the Assam-Nagaland border, the two Chief Secretaries of the two states Saturday signed a Memorandum of Understanding (MoU) to immediately withdraw states’ forces from the border locations to their respective base camps.

The agreement comes at a time when Assam and Mizoram were at loggerheads over claims of incursion by both sides on their territory. On July 26, six personal of Assam police were killed by Mizoram police in one of the biggest escalations of violence on the border issues.

The agreement between the states was announced by Assam Chief Minister Himanta Biswa Sarma and said that an understanding has been reached to immediately withdraw states’ forces from border locations.

“This is a historic step in our relations. My gratitude to HCM Sri @Neiphiu_Rio for working with #Assam in restoring peace on the border. Assam is committed to ensuring peace along all its borders & strives for social & economic prosperity of #NorthEast region,” Sarma said on Twitter.

He also attached the minutes of the meeting held between the chief secretaries of the two states on Saturday.

Nagaland protested after the Assam Police allegedly tried to set up a camp close to Vikuto village under Tzurangkong range in Mokokchung district of Nagaland on June 29. The area is near Mariani in Assam’s Jorhat district.

Several rounds of negotiations were held to find a solution to the issue. Nagaland’s Deputy CM Y Patton held a meeting with various organisations of the Tzurangkong area on Friday.

He assured that the border issue is being taken up at the highest level for a peaceful resolution, but Nagaland did not withdraw its forces. Patton claimed that in the past agreements between the two Northeastern states, both police forces had agreed to withdraw from the border areas, but Assam did not do it and has in fact increased its strength while Nagaland withdrew its forces.

“We will not make the mistake again,” he said before today’s agreement was reached. Assam and Nagaland share a 512.1 km long border.

The border dispute between Assam and Nagaland began soon after Nagaland became a state in 1963. The Nagaland State Act of 1962 had defined the state’s borders according to a 1925 notification when Naga Hills and Tuensang Area were integrated into a new administrative unit.

Nagaland, however, did not accept the boundary delineation and demanded that the new state should also have all Naga-dominated area in North Cachar and Nagaon districts of Assam. Major clashes on the inter-state border took place several times since 1965. With agency inputs