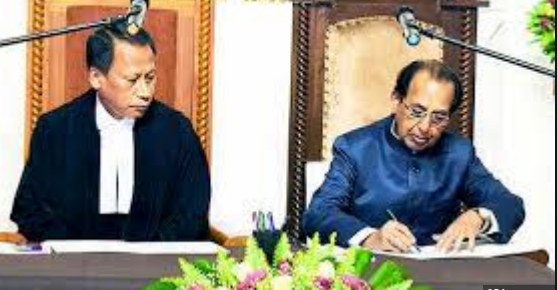 Kohima: Governor of Assam Professor Jagdish Mukhi, who took the additional charge of Nagaland, was sworn in as the 20th Governor of Nagaland at Dr Imkongliba Ao Hall, Raj Bhavan here.

Prof. Mukhi, speaking on the occasion to the people of Nagaland, said he was honoured and humbled to take over charge of the State and assured that he would remain committed to his constitutional responsibilities. He said it was the wish of God to introduce him to the people of this beautiful land, people, and its vivid culture. He expressed his gratefulness to the people of Nagaland for showering their abundant love and affection and solicited trust in him.

He looked upon on his present assignment as God’s commandment to serve the Naga people to the best of his ability and assured that he will strive with his utmost to serve the people. Prof. Mukhi said that Nagaland is an embodiment of the Indian Nation, exhibiting Unity in Diversity, diversity in its ethnicity and unified by the Naga identity with various Naga tribes with a different identity, culture and traditions.

He called upon the people to work together in making Nagaland a cultural hub of India and a dreamt about and sought after tourist destination.

The newly appointed Governor said that Naga political issue has covered a remarkable path of progress under the guidance of Prime Minister Narendra Modi and expressed confidence that soon Nagas will have a comprehensive and inclusive solution ensuring utmost honour and dignity to the Naga people.

Governor Mukhi said that the COVID-19 pandemic has brought new challenges, where the dedicated health workers and other frontline workers and aware people of Nagaland, which is gradually recovering from this crisis and becoming even stronger, the release said.