Assam Pradesh Congress Committee has Ripun Bora questioning chief Himanta Biswa Sarma's sudden drives against syndicates and drugs only after taking office of the chief minister while choosing to overlook these issues earlier. 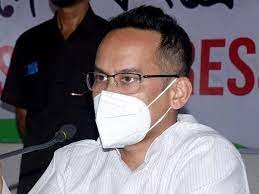 Guwahati: Opposition Congress in Assam has raised questions on the sudden drive of the BJP led government in the state against drug and cow syndicates and alleged that these syndicates were operating in the state during the previous BJP government.
Assam Pradesh Congress Committee has Ripun Bora questioning chief Himanta Biswa Sarma’s sudden drives against syndicates and drugs only after taking office of the chief minister while choosing to overlook these issues earlier.
“CM Sarma said that Assam does a business of Rs. 1000 crore per month from cow syndicate. During Sarbananda Sonowal’s government, Congress raised many questions on the various syndicates operating in Assam, but the government denied them. Surely the illegal business of cow trade and drugs did not start only in two months, that is from the 2nd of May 2021? It is thus obvious that such illegal activities were going on during the previous BJP Government. So what stopped the present CM from acting then?” Mr Bora said addressing a press conference here.
“We appreciate the government’s drive against syndicates and drive but would like to know when such extensive steps are being taken after Himanta Biswa Sarma became the chief minister, why were no steps taken earlier. Sarma should not take credit for all the drives being conducted. Rather, the fact that the Congress party was raising the issue of illegal cow smuggling for a long time has been indicated,” said Member of Parliament from Kaliabor constituency Gaurav Gogoi.
The opposition has also questioned the evaluation process for class 10 and 12 board examinations.
Mr Bora said that while education minister Ranoj Pegu had announced that the assessment based mark sheets will not be considered eligible for applying in several government jobs, CM Sarma later discarded the statement and clarified that the said mark sheets will be accepted for all government recruitments except for the Teacher Eligibility Test (TET) examination.
“Their recent announcements and decisions display their complete lack of sincerity and sensitivity about the future of students. The controversial and mismatched statements of the Education Minister and the Chief Minister have further compounded and confused the students, parents, and guardians,” said Bora.
He demanded a final decision on the issue and should not hang the student in uncertainty.