Arunachal to carry out random COVID testing on railway passengers

The DMO informed that the COVID positivity rate of Itanagar Capital Complex is less than 3% in the last one week. Also, the status of vaccination coverage is the maximum amongst all the districts of the state. 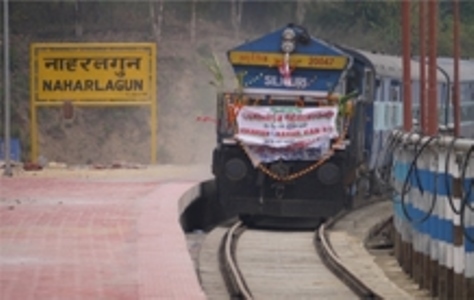 Itanagar: The Arunachal Pradesh Health Department has decided to carry out rapid antigen tests (RAT) randomly on the railway passengers at the Naharlagun railway station from tomorrow onwards.

The railway services in the frontier state that remained suspended due to the outbreak of COVID-19 pandemic resumed on September 1 after a gap of one and half years. The decision to conduct random testing on railway passengers was taken at a meeting convened by Itanagar Capital Complex Deputy Commissioner Talo Potom at his office premises here today with various stakeholders to discuss the current covid scene in the capital region.

“As railway services have started, random RAT tests will be carried out on the passengers especially those suspected of COVID-19 and also those without proof of vaccination at the railway station itself from tomorrow onwards,” Itanagar Capital Complex District Medical Officer (DMO) Dr Mandip Perme said.

The DMO informed that the COVID positivity rate of Itanagar Capital Complex is less than 3% in the last one week. Also, the status of vaccination coverage is the maximum amongst all the districts of the state.

“Though positivity rate has declined, we must ensure that COVID Appropriate Behaviour is strictly followed by all to keep the situation under control,” said the DMO.

Meanwhile, the district administration has decided to extend the night curfew in Itanagar Capital Complex from 9 pm to 5 am daily, starting from September 3 to 30 next. “Opening of shops and commercial establishments will be allowed on both sides of the highway till 8 pm and thereafter, no activities are to be allowed during curfew period except for the exemptions,” the DM said.