The 17-year-old was handed over to the Indian Army by Chinese PLA in Arunachal Pradesh's Anjaw district on January 27 last. 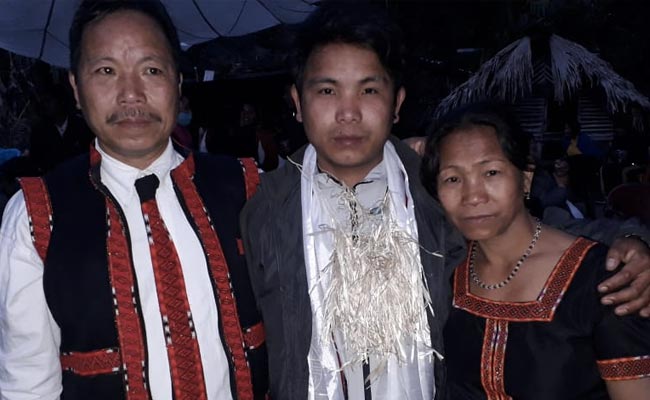 Itanagar: Arunachal Pradesh teen Miram Taron has finally come back home to a warm welcome and reunited with his family at Tuting in Upper Siang district on Monday about two weeks after he had gone ‘missing’ along the Line of Actual Control (LAC) with China.

The 17-year-old was handed over to the Indian Army by Chinese PLA in Arunachal Pradesh’s Anjaw district on January 27 last.

The teenager was formally handed over to his parents at Tuting this afternoon by the Army and the local administration in a brief ceremony, Additional Deputy Commissioner of Tuting, Starlie Jamoh, said, while adding that he was then received by the villagers and taken to his native village, Zido.

“It was a pleasant scene to watch as the teen was seen warmly hugging with his parents and relatives,” the ADC said. The youth has come after completing the compulsory quarantine and other formalities at Kibithoo and Lohitpur across Anjaw district.

Apun Taron, the teen’s father, was elated to see his son back home and thanked the Centre for the efforts in coordinating his return and bringing him back safely. On January 27, China’s People’s Liberation Army (PLA) has handed over Miram Taron to the Indian Army at the Wacha-Damai interaction point in Arunachal Pradesh, Union Minister of Law and Justice Kiren Rijiju had said.

“The 17-year-old Miram Taron from Upper Siang district of Arunachal Pradesh had inadvertently strayed and went missing while hunting on January 18, 2022. The Indian Army immediately approached PLA on hotline to trace and secure safe return of the boy and shared identity details of Miram with PLA.

“Miram Taron is in high spirits and is elated to be back to his country. He and his family expressed gratitude for the sincere efforts by Indian Army and the government to ensure his safe return,” he said.

However, BJP’s Arunachal East MP Tapir Gao had claimed said that the 17-year-old was abducted by the PLA troops from Lungta Jor area under Siyungla area of Bishing village in Upper Siang on January 18 when he had gone hunting along with his friend, Johny Yaying (27), who escaped from the PLA and reported to the authorities. It may be mentioned that China had initially denied reports of his alleged abduction.

However, the Chinese PLA confirmed that a ‘missing’ boy was found on their side of the border and sought details from the Indian side to establish his identity.

In September 2020 too, the PLA had reportedly abducted five youths from Arunachal’s Upper Subansiri district after they allegedly strayed into Chinese territory and released them after about a week.