VC Prof Saket Kushwaha suffered a minor injury on his right thumb after being hit by splinters from a flower pot, which the assaulters hurled at him 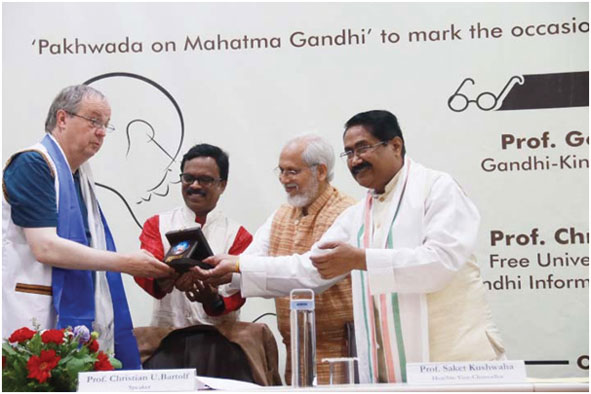 Itanagar: The Rajiv Gandhi University (RGU) Vice Chancellor’s Secretariat was vandalized by the members of the RGU Students’ Union (RGUSU) on Monday, with the vice-chancellor sustaining injuries, university sources said..

Vice Chancellor and his PSOs sustained injuries during the ‘violent’ incident, the university sources said.

“In the attack, the VC Prof Saket Kushwaha suffered a minor injury on his right thumb after being hit by splinters from a flower pot, which the assaulters hurled at him. Even his PSOs were attacked. One of them was hit with a chair, while the other was choked,” senior security officer (SSO) of the university, Badal Techi said.

He said the incident happened when the students sought to meet the VC to discuss their demand for the re-introduction of the ‘hostel prefect system’. He also confirmed that no FIR has so far been lodged by the university authority in connection with the incident.

Meanwhile, the RGU authority in a statement said, “A few days ago, the newly-formed students union of the University had submitted a representation to the University authority for the revival of the earlier Prefect system in the hostels. The file was being discussed and processed according to the established procedure of the University that requires discussion and recommendation by the Academic Council which has to be further approved by the Executive Council of the University.

“Today an unruly group of students consisting of members of the RGUSU forcibly entered the Vice Chancellor’s chamber by breaking the door and vandalised the office causing extensive damages to the furniture, equipment and many office items. The PSOs and the Vice Chancellor, Prof Saket Kushwaha were also hurt during the violent incident,” the statement read.

It said that the Prefect system in the hostels of the University was abolished in 2021 following complaints of unethical behaviour, financial misconducts and misuse of the powers of Prefect by those who were in charge of the position.

The University had substituted the Prefect system with a robust system by appointing a chief warden, two wardens for each hostel assisted by a committee that includes members of student-boarders from the same hostel so that the genuine demands of the student-boarders is met. The students through these committees manage the day-to-day activities of the hostel, including running of mess,” the statement said.

However, in regard to the demand of the students’ union (restoration of Prefect system), the University authority is yet to decide on the matter but the students pre-empt that it is an unfair restriction of prefect system while the same is still under process. The incident has been reported to the law-enforcing authority, it said.

“Such display of violence by the students, and that too leaders of the students’ community, is deplorable and it is desirable that law should take its own course,” it said.