It was learnt that one truck had supplied this quantity to Chaudhary from the Senapati district in Manipur.  The truck was seized and the driver arrested too. 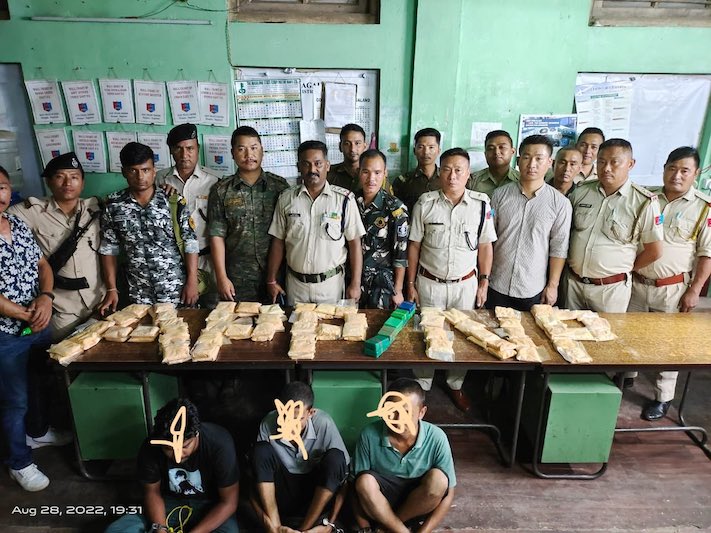 Itanagar: In the biggest-ever drug haul, the Arunachal Pradesh Police teaming up with their counterparts in Nagaland during a joint operation on Sunday seized 1200 grams of heroin worth Rs 2.36 crore and arrested three persons including a major supplier in Dimapur- the main gateway and commercial centre of Nagaland, a senior Arunachal police officer said on Monday.

The arrestees have been identified as Ashraf Hossain Choudhary (34) of Assam’s Karimganj, Kamaluddin (26) of Barbali-2, Morajhan (Assam) and Shayan Chandra (27) of Sekmai, Imphal West (Manipur).

Police claimed the arrest of the trio is a big blow to the Moreh-Dimapur-Nagaon supply chain.

The SP said, following the arrest of three drug peddlers – one Apu Venia with 5.38-gram heroin from Seppa, and Saiful Islam and Asadul Islam from Itakhola in Assam’s Biswanath district recently in connection with the FIR case No. 41/2022 registered under Section 21(b) of NDPS Act, a team from Seppa Police Station, led by OC Insp Neeraj Nishant, in a well-planned operation with Dimapur East Police, apprehended Chaudhary with 1.20 kg heroin when he was dealing a part of it to Kamaluddin, who also arrested on the spot.

It was learnt that one truck had supplied this quantity to Chaudhary from the Senapati district in Manipur.  The truck was seized and the driver arrested too.

On the financial front, bank accounts with Rs 7 lakh have been frozen so far as money generated from drugs was being routed through these accounts, he said.

“With these arrests and seizure, APP has added another milestone in its war against drugs. Major quantities of drugs and suppliers are off the streets that could have spoiled the youth of North East,” the SP said.  “Further investigation is on to ascertain suppliers originating from Manipur,” he added.