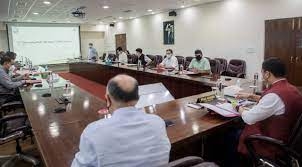 tanagar: Arunachal Pradesh Chief Minister Pema Khandu here on Tuesday chaired the second governing council meeting of the Chief Minister’s Arogya Arunachal Society (CMAAS), the nodal agency for implementing the Chief Minister’s Arogya Arunachal Yojana (CMAAY) that envisages to provide cashless treatment in empaneled hospitals to citizens of the state.
Beneficiaries under the scheme include all APST citizens and state government employees.
Congratulating CMAAS chief executive officer (CEO) Dr Nabam Peter and his team under the guidance of principal secretary and secretary of Health for ensuring the beneficial scheme reaches to maximum beneficiaries, Khandu said a target must be set and achieved to provide the facility to each and every eligible citizen of the state besides roping in as many hospitals as possible on need basis.
“The main objective of the scheme in the long run should be to focus on and putting in place robust preventive measures from the data collected while implementing the scheme. The name of the scheme itself mentions ‘Arogya Arunachal’ that means disease-free Arunachal that can be achieved only through preventive measures and healthy lifestyle,” he said at the meeting here.
Khandu assured support to the CMAAS and urged the principal secretary and secretary to coordinate with the chief secretary, planning commissioner and the IT secretary to make the scheme hassle-free for the common citizens as well as the empaneled hospitals in a transparent manner.
He suggested putting in place ways and means to ease the enrollment process of beneficiaries.
To the concern raised on aids given from the CMRF for treatment in existence of CMAAY, Khandu asked the officials to review and suggest a way forward.
He, however, maintained that for diseases that require processes like organ transplant are quite costly and
many poor patients may not be able to avail it. Therefore , he suggested that such patients may be allowed to avail benefits under CMAAY as well as CMRF with recommendations from the nodal agency.
Giving a brief report on the scheme, Dr Peter informed that CMAAY along with the Central government scheme of Pradhan Mantri Jan Arogya Yojana, launched in 2018, has enrolled 1.01 lakh beneficiary families so far. An enrolled family is entitled to a sum of Rs five lakh per year for cashless treatment in empaneled hospitals.
Till date , 81 hospitals have been empaneled of which 27 are out of Arunachal Pradesh, 15 being in neighbouring Assam.
As per records top procedures utilised by beneficiaries are for LSCS, cataract, cholecystectomy, appendicectomy and chemotherapy. TRIHMS, Naharlagun, near here, stands at the top in giving free and cashless treatment to most number of beneficiaries under the scheme followed by Bakin Pertin Hospital Pasighat, Rama Krishna Mission Hospital , Itanagar, B Baruah Cancer Institute, Guwahati , and Khan Drowa Zangmo District Hospital , Tawang.