At least 17 people have been arrested by the Delhi police over posters that came up in the past few days in the capital criticising Prime Minister Narendra Modi's handling of the coronavirus pandemic, the NDTV reported. 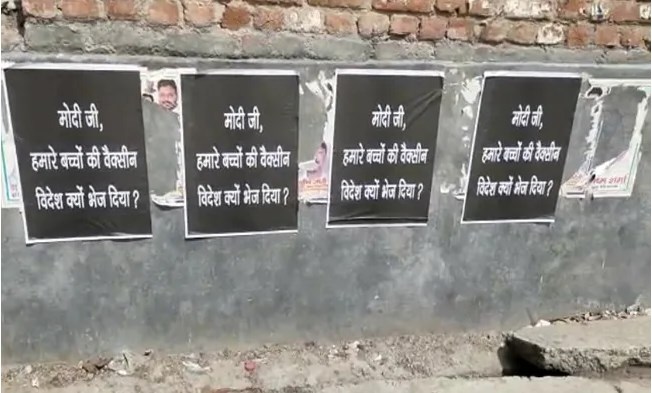 New Delhi: Congress leader Rahul Gandhi, along with a bunch of other Congress leaders, Sunday hit out at the Centre over reports of several people being arrested in Delhi for merely putting up posters critical of the government’s handling of the Covid crisis.

“Arrest Me Too,” Gandhi tweeted Sunday in both English and Hindi, along with the “white Hindi words on black background” poster that led to the arrests. It read: “Modi ji, why did you send vaccines meant for our children, abroad?”

At least 17 people have been arrested by the Delhi police over posters that came up in the past few days in the capital criticising Prime Minister Narendra Modi’s handling of the coronavirus pandemic, the NDTV reported.

The Delhi police, according to ANI, has said it had also registered around 21 cases under the Defacement of Public Property Act & Section 188 in the matter relating to the posters.

India has reported more than 3 lakh infections a day over the past three weeks, overwhelming its health care system and leaving many without hospital beds, oxygen and adequate treatment.

Yet, Prime Minister Narendra Modi’s government has faced widespread criticism for appearing more intent on addressing the bad publicity because of the missteps than solving the crisis.

Governments in several states like Uttar Pradesh, Gujarat, and Madhya Pradesh have been accused of trying to hide their casualties as hundreds of bodies have been seen floating in rivers and buried in the sand by the banks.

Besides Gandhi, several others have criticised the arrests saying it indicates a “lawless state gone amuck”.