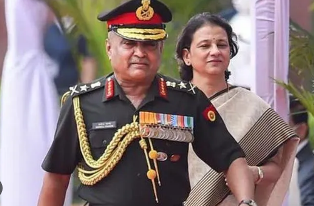 General Manoj Pande has come to France on a four day visit, from November 14 to 17, aimed at enhancing defence cooperation with the country.

During the visit, the Army Chief will be laying wreath at Neuve Chapelle Indian Memorial, which commemorates the sacrifices of 4,742 Indian soldiers during the First World War.

He is scheduled to call on the Chief of the Defence Staff, Chief of the Army Staff, and Commander Commandement des Forces Terrestres (CFT) / Command of the Land Combat Forces, where he will discuss avenues for enhancing India-France defence relations, Indian Army said.

The Indian Army said that the ever-expanding defence cooperation engagements which encompass a broad spectrum of activities have established a strong bonhomie across every level of the two Armies.

The visit of Gen Manoj Pande to France will further strengthen the bonds of trust and understanding between the two armies, the Indian Army added.