Are your oxygen levels dropping at home? Here’s how to correctly perform prone position 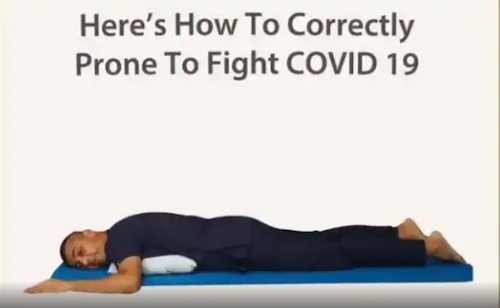 New Delhi: As Covid-19 cases surge in the country, India is reeling under the unavailability of oxygen, caused by a shortage due to the rapid rise in cases.

More patients than ever are reporting ‘breathless’ as a common symptom. ICMR DG Dr Balram Bhargava on Monday said that there is no difference in per cent of deaths between the first and the second wave and added that a higher requirement of oxygen was found in this wave., News18 reported.

“Higher requirement of oxygen was found in this wave. There is no difference in the per cent of death between the first wave and second wave from the data we have,” said Balram Bhargava. Even as the current active caseload stands at 20 lakh, Twitter and Facebook are flooding with messages asking people for help with finding oxygen. As several patients are in-home quarantine, and monitoring their symptoms to notice a change or dip in their oxygen levels, the solution may be a simple posture.

In the latest Standard Operating Procedure (SOP) for Covid-19 released by AIIMS Patna, doctors have emphasised using prone positioning to manage blood oxygen levels – so what is the prone posture?

News18 recently asked an expert to explain the science behind it: Dr Rajesh Pande, the Senior Director of BLKC Center for Critical Care in Delhi, told News18 that “The lung has three regions, front, middle and back. When someone is lying with their back down-chest up, the blood supply to the back is the best, and the one to the front is the least. If you look at the air going in, the back gets the least oxygen supply. To change this, when someone is put in the prone position, the heart rests on the breast bone and gives space to the lungs to expand, increasing the airflow to the back, where the blood circulation is the most. So, coupled with better blood circulation, and more oxygen, then it leads to better, effective oxygenation.”

He further adds that, “Normally, before COVID, this was done for patients who had severe respiratory failure, and on a ventilator. We put them in the prone position for 16 hours, and it would stretch the mortality rate for the patients significant,” he says, adding that, however, before COVID, this wasn’t the norm. “We wouldn’t do this for any and every patient with breathing difficulty. For that, we have two methods of providing oxygen – either with an invasive ventilation technique, by intubating them, or a non-invasive ventilation technique, where a mask is put on them. The patients who were put on the prone method were usually put in this position when they were heavily sedated, on a ventilator, usually to improve their chances. It has now become a norm for Covid-19 patients.”