Endorsing the statement of Rahul Gandhi on the issue, the APCC said their leader “has taken it seriously to safeguard the Indian territory from Chinese intrusion”. 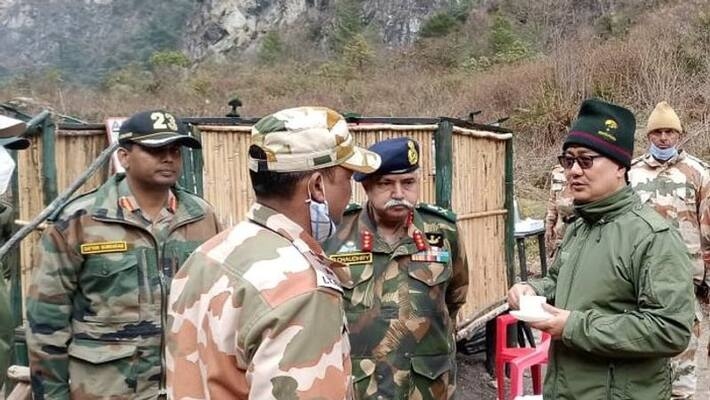 Itanagar: Following Union Law and Justice Minister Kiren Rijiju’s statement that “Rahul Gandhi does not know about border security issues” post the Congress leader’s fresh attack on the Centre over China’s colony-building activity on the Arunachal Pradesh border, the Arunachal Pradesh Congress Committee (APCC) said that Rijiju’s statement is “inexcusable” and instead of blaming others, he should go to the said territory to check the ground reality and tell the “truth” to the people.

“The recent statement of Kiren Rijiju against Rahul Gandhi that ‘Rahul Gandhi does not know about border security issues’ is inexcusable and just to divert the attention of the people. Instead, he should go to the said territory to check the reality and address the truth to our people about the Chinese intrusion in Arunachal Pradesh,” stated APCC spokesperson Zirgi Kadu while talking to the media here on Monday.

Endorsing the statement of Rahul Gandhi on the issue, the APCC said their leader “has taken it seriously to safeguard the Indian territory from Chinese intrusion”.

Reacting to the reports that “The satellite image claimed that China has built another village in Shi-Yomi District inside 6 to 7 kilometres in Indian territory with over 60 structures”, the APCC asked why the Union Govt and State Govt kept mum on this issue and added, “they should come clear and tell us the steps taken in this regard by the Govt”.

Going deep into the matter, the Congress spokesperson said, “Sitting MP Tapir Gao has given several statements even in Parliament about Chinese intrusion in Arunachal Pradesh. But the statement of Kiren Rijiju is completely separate on the issue.

The statements of both BJP MPs of the state are contradictory. Rijiju just tried to hide the failure of BJP Govt in handling border tensions with China,” he alleged. The State Congress, meanwhile, demanded formation of a high-level fact-finding panel to unearth the “ground realities”.

“We demand a High-Level Fact-Finding Committee should be constituted comprising of all political parties, NGOs, civil societies and other important organizations immediately to find out the ground realities,” Kadu said.

As per a recent TV report, China has constructed a second enclave or cluster of at least 60 buildings in Arunachal Pradesh. It added, the new enclave did not exist in 2019 according to the satellite images, but could be seen a year later.

“It lies 93 km east of a China-constructed village in Arunachal Pradesh,” the report said, adding that the second enclave lies approximately 6 km “within India in the region between the Line of
Actual Control (LAC) and the International Boundary”.