Amid apprehensions of violence, elaborate security arrangements made for Tripura ADC polls

A delegation of CPI-M leaders met state election commissioner M L Dey yesterday and expressed concern over the decision of not installing CC cameras and video recording of the polling at the booths. 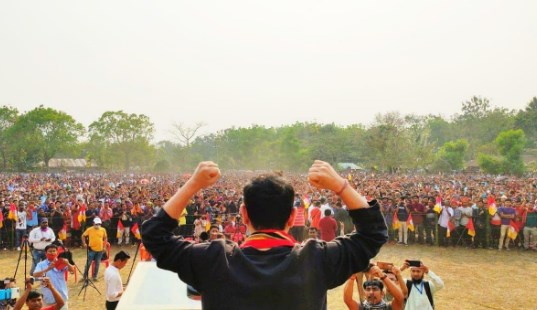 Agartala: Amid apprehensions of large scale violence and booth capturing in the upcoming election to Tripura Tribal Areas Autonomous District Council (ADC), both the major opposition parties–CPI (M) and Congress–demanded state election commission to install close circuit camera in all 1,244 polling stations and video recording of the casting.

The leaders of both the parties alleged that the state election commission has not taken any satisfactory steps to ensure fair polling considering the experience of the last three-tire panchayat elections and violent activities of the ruling BJP and IPFT front.

A delegation of CPI-M leaders met state election commissioner M L Dey yesterday and expressed concern over the decision of not installing CC cameras and video recording of the polling at the booths.

The Congress also raised the same demand raising while election authority made it clear that two days before raising such demands are not possible to accept.

“We have had several meetings and sought suggestions from all the political parties for holding free and fair elections but none of the parties raised the demand for CC TV cameras and video recording of polling before. At the eleventh hour, fulfilling such a demand is simply impossible; however, we shall take all measures to hold fair polling on April 6 next,” said a senior official of state election commission.

The CPI-M demanded no one other than voters should be allowed in the polling booths during the election hours. They demanded at least a day before the election commission has to evacuate all the non-residents of the particular area and urged to direct the police to ensure immediate action on any poll related crime besides, strict surveillance in ADC area.

They have also demanded security for the polling agents and local leader of their respective locality.

Meanwhile, state home department stated that adequate security arrangements have been made to ensure free and fair polling in the ADC.

Vehicular patrolling has been arranged in all the 61 police stations of the ADC by deploying 168 light vehicles.

As many as 16 Companies of CRPF, in addition to Police and TSR personnel, have been deployed in poll bound areas while execution of warrants of arrest has already begun.

Besides CRPF, 5684 TSR personnel, 3435 Police and 263 Home Guards have been deployed across 28 ADC constituencies.

Campaigning for the ADC polls ends this evening.