282 Officials said more than 1, 54,000 pilgrims had paid obeisance at the holy cave shrine of Amarnath till early today so far. 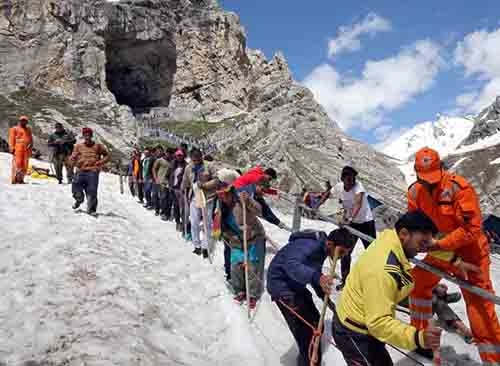 Srinagar: Amarnath Yatra resumed on Friday from both Pahalgam and Baltal routes after remaining suspended temporarily for a day due to inclement weather, officials said.

They said a fresh batch of yatries were allowed to proceed from the traditional Nunwan Pahalgam base camp and shortest Baltal via Dumail today amid cloudy but dry weather conditions.

The yatra resumes late from the shortest Baltal side and as many as 3,673 pilgrims including 946 women, 88 Sadhus, and 14 Children proceed via Domail to undertake the trek to the cave shrine of Amarnath.

As many as 395 pilgrims were also airlifted by chopper from Baltal base camp to Amarnath cave shrine for paying obeisance there till 11 AM on Friday.

Fresh batches of yatries were also allowed to proceed from Traditional Nunwan base camp in Pahalgam and at halting points of Chandanwari and Panjterni in south Kashmir today after remaining suspended yesterday due to inclement weather conditions.

282 Officials said more than 1, 54,000 pilgrims had paid obeisance at the holy cave shrine of Amarnath till early today so far.

Similarly, Baltal to Holy Cave has the possibility of rain showers with generally cloudy weather till evening, at Baltal, Dumail, Brarimarg, Sangam, and Holy Cave.

Meanwhile, a 66-year-old pilgrim identified as Mahaveer Prasad son of Shri Gupta from Karnal Haryana died of cardiac arrest on Friday while he was on his way to the holy cave shrine from Pahalgam base camp, officials said.