According to the report, a three-member team of Akasa Air visited Agartala Airport to assess the feasibility and frequency of flights on both routes 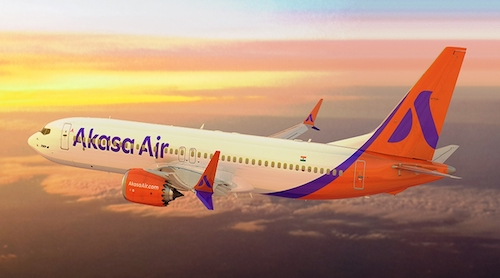 Agartala: A newly launched low-cost airline Akasa Air is all set to start its flight operations on Agartala-Guwahati and Agartala-Bengaluru routes at the end of August, Airport Authority of India (AAI) officials here said on Friday.

According to the report, a three-member team of Akasa Air visited Agartala Airport to assess the feasibility and frequency of flights on both routes, likely to begin after a few weeks last week and held a discussion with AAI officials.

Akasa Air, a brand of SNV Aviation Private Limited, is an Indian low-cost airline headquartered in Mumbai has acquired its first Boeing 737 MAX aircraft this month.

Akasa aims to have 18 aircraft by the end of 2022, and to add at least 12 aircraft every year, airline officials stated.

The airline will initially launch services from metro cities to tier-2 and tier-3 cities, which have received their Air Operator Certificate) from DGCA after completing the required proving flights. The airline is expected to launch commercial operations from next week, they added.

At present Indigo, Air India and Flybig have been operating at least 20 flights with 14 fleets of Indigo to and from Agartala to Guwahati, Kolkata, Jorhat, Delhi, Chennai, Bengaluru and Hyderabad along with connecting all destinations of the country.

“Tripura government has been persuading to bring more aviation operators in Agartala sector to ensure passenger friendly service in the state, as a large number of businessmen, tourists and students are coming to Tripura every day,” said Transport Minister Pranajit Singharoy adding that the state government is trying hard to start railway connectivity with Kolkata via Dhaka from Agartala.