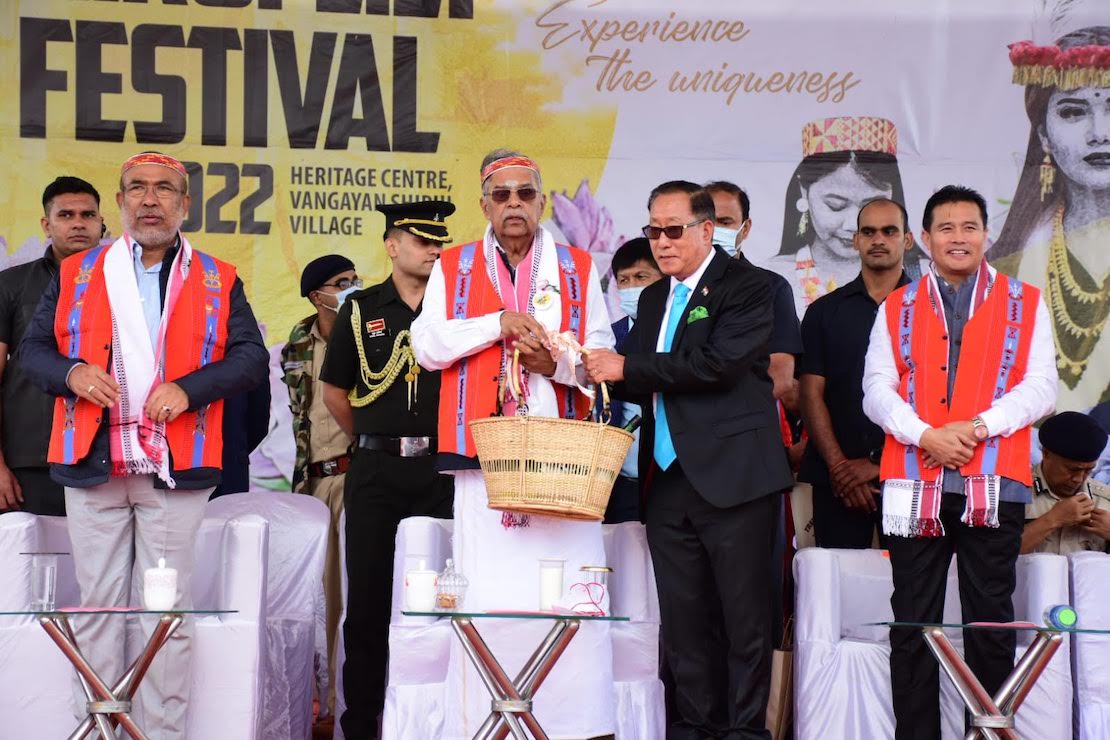 Ukhrul: After two years of break due to Covid, Manipur Governor La Ganesan inaugurated the 4th edition of the State Level Shirui Lily Festival at Shirui Village ground Wednesday in the presence of Chief Minister N Biren Singh who was present as the functional president.

The festival which is organized by the Department of Tourism in collaboration with the Ukhrul District Administration and Shirui Village Authority will go on till May 28, 2022. It will be mainly held at Shirui Village ground which will host cultural events and stalls of various traditional products will be opened there.

The other location is the Bakshi ground at Dungrei which will host Shirock, an evening singing competition from various bands all across the country.

The Governor in his inaugural speech said the festival is annually celebrated in Manipur and features music, food, traditional games, and other cultural activities which aim to increase awareness about this rare flower and develop sustainable and responsible tourism in Manipur.

The Lily, which blooms in late May to early June has become well-known across the world because of its rarity. The flower is found only on top of the Shirui Hill of Ukhrul District in Manipur. He further stated that this flower needed proper scientific study so the flower can continue to thrive in its original habitat.

The visiting Chief Guest informed the ICAR has taken up tissue culture of this plant and hopes to grow this plant not only in the original habitat but also in laboratory conditions. The focus on global warming and climate change and its impact on the Lily including remedial measures is laudable and felt it’s now most timely.

Shirui Lily Festival, if marketed properly, can become a tourist attraction. It will not only create awareness about the need for protection of our environment which needs to be targeted to our own people but it can attract tourists which will not only improve the well-being of the local population but can also bring in advanced knowledge and expertise to improve the environment. Not only the Lily but the monsoon flowers of Shirui range and the Rhododendron can be marketed. At the end of the speech, the chief guest wishes for a successful week-long programme.

Chief Minister N Biren Singh who was the functional president at the occasion informed the gathering that Rs 46 crore have been sanctioned under the Minority Affairs, PMJVK scheme, for the construction of Shirui Heritage Village and up-gradation of Bakshi ground. The said project will soon be implemented.

He also informed construction of cable cars at Loktak and Shirui is in the pipeline.

Referring to the up-gradation of Pettigrew College to a University, one of the oldest colleges in the state, he said one more bus has recently been given. Moreover, constructions in the college are in full progress now. The government will not compromise on quality. Misappropriation of funds and projects taken up under the government by any agent whether it be departmental or contractors will come under the scrutiny of the law. He later appealed to the public for the cooperation so as to enable the process of development in the land.

A few unique displays during this festival are a Mithun, reared mostly in the northern areas of Ukhrul, Haofa (endangered Tangkhul dog) and famous Lungpi pottery. Other features during the festival include Miss Shirui Lily beauty contest, cycling, marathon, 7 A-side football, Essay writing, music and many more. Special appearances by Miss Universe 3rd runner up, Adline Castenino as showstopper at the opening fashion show, and The Monument, a British-based rock band at Bakshi ground on May 28 evening are some of the few highlights.