Adopt resolution to close down all proposals for uranium mining in Meghalaya: Sangma told

Meghalaya is the third uranium-rich state in the country after Jharkhand and Andhra Pradesh. 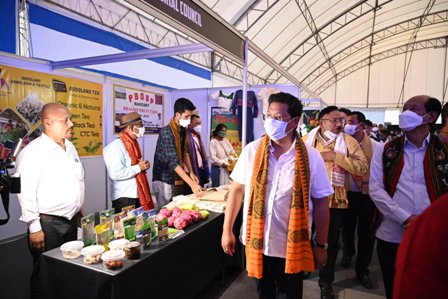 Shillong: The Hynniewtrep Youth Council (HYC), a pressure group in Meghalaya on Tuesday urged Chief Minister Conrad Sangma to bring about a resolution in the Assembly to close down all proposals relating to uranium mining in the state.

The HYC’s demand to adopt a resolution against uranium was after Minister of State in the Prime Minister’s Office Dr Jitendra Singh had informed the Lok Sabha that the Centre has not yet abandoned the idea of uranium mining from Domiasiat-Mawthabah area in South West Khasi Hills.

In a memorandum submitted to Chief Minister Conrad Sangma, HYC President Robertjune Kharjahrin and General Secretary Roy Kupar Synrem said, as per a statement of Union Minister of State Dr Jitendra Singh to an unstarred question in the Parliament its clear that the government of India is still pursuaing with uranium mining in the state.

Meghalaya is the third uranium-rich state in the country after Jharkhand and Andhra Pradesh. The state accounts for 16 per cent of India’s uranium reserves, with deposits estimated to be around 9,500 tonnes and 4,000 tonnes respectively at Domiasiat and Wakhaji, both in South West Khasi hills district.

The Uranium Corporation of India Limited (UCIL) has proposed to set up an open-cast uranium mining and processing plant at Maghalaya’s Mawthabah. It had pegged Kylleng Pyndengsohiong Mawthabah project in Meghalaya for Rs 1,100 crore.

The ores are spread over a mountainous terrain in deposits varying from eight to 47 metres from the surface in and around Domiasiat, 135 km west from Shillong.

The previous Congress-led Meghalaya government had annulled the decision taken during the previous D.D. Lapang regime to lease 422 hectares of land to UCIL for pre-mining activities in South West Khasi Hill district.

hanging fire since 1992 after several groups and political leaders expressed fears of radiation impact on human health and environmental degradation.

In 2018, the Atomic Minerals Directorate (AMD) had decided to stop exploratory drilling for uranium in South West Khasi Hills district, while the UCIL reportedly closed down its office in Shillong due to continued opposition towards uranium mining in the state.