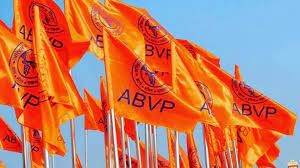 Agartala: The student wing of ruling BJP, Akhil Bharatiya Vidyarthi Parisad (ABVP) has lodged formal FIR against Sub Divisional Police Officer (SDPO) Ramesh Yadav and Inspector Sumanta Bhattacharjee in West Agartala police station over alleged police action on them when they were demonstrating in the directorate of education early this week.

The ABVP alleged both the officers have led the charge of baton on peaceful demonstration, which has left around 25 students injured in the unprovoked police action. The ABVP activists in support of the students of diploma in elementary education had held a demonstration in front of the Shiksha Bhawan demanding to conduct online examinations instead of offline.

Police said the functioning of the offices were disrupted due to the day-long demonstration in campus where at least four directorates have been operating and finally in the evening they had to apply force to evacuate the employees. They were given sufficient time and opportunity to vacate the place but the agitators didn’t respond, which compelled police to mild lathi-charge to disperse the crowd, Ramesh Yadav told media.

“We had no intention to apply force but when the demonstrators didn’t respond logically after consulting all concerned and provision of law police charged mild lathi on them. The intention was not to hurt but to disperse the crowd. Before applying force we requested them with folded hands to withdraw the agitation and to hold dialogue with the authority but didn’t respond,” Yadav added.