“Despite Meghalaya’s rich biodiversity, there are roads with potholes, schools without teachers, and youths without jobs,” he claimed. 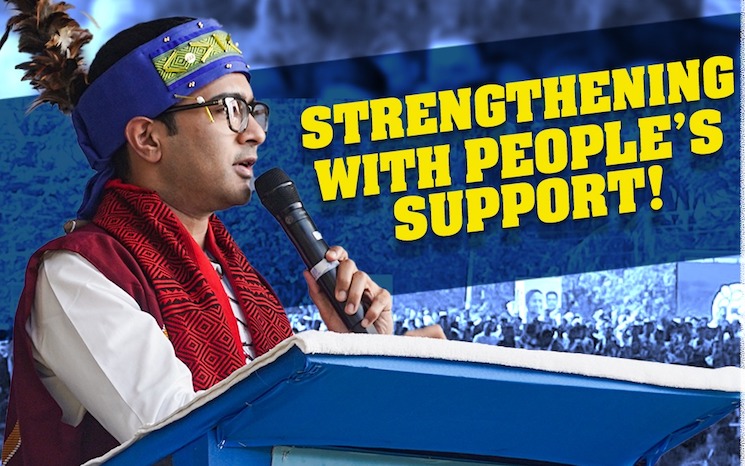 “The shoddy alliance of Meghalaya Democratic Alliance (MDA) would not secure a single seat in the Garo hills in the 2023 polls,” Banerjee said, addressing his maiden public meeting of over 25,000 TMC supporters here in Garo Hills.

“In the next three months, all Meghalayans irrespective of caste, creed, and religion will unitedly fight to end the chaos of four and half years due to the incompetent leadership of the National People’s Party (NPP)-led MDA government,” he further told his party supporters.

Elections to the 60-member House Meghalaya Assembly are scheduled to be held in February next year.

“MDA is supposed to stand for Meghalaya’s Democratic Alliance. However, the collapsing infrastructure in the state proves that all progress has taken place in one family, to one person,” the West Bengal MP said in reference to Chief Minister Conrad Sangma.

“Despite Meghalaya’s rich biodiversity, there are roads with potholes, schools without teachers, and youths without jobs,” he claimed.

Throwing an open challenge to the NPP-led MDA government, Banerjee said, “The NPP has not even filed its Election Expenditure report. I am challenging the NPP to come forward and face the debate: ‘Why did the MDA government fail drastically in the last four and half years?’

Stating that the three petals of the flower of TMC’s logo stands for the three main tribes Garo, Khasi, and Jaintia of Meghalaya, the nephew of the West Bengal Chief Minister Mamata Banerjee, said, “the TMC will not cower down to autocratic forces.”

Promising a brighter future for Meghalaya, the TMC leader said, “The state would be introduced to a new government in three months that aspires to bring a holistic change.”

“No MoU would be signed with the Assam government without consulting the people; we would fight to have Garo and Khasi included as languages in the Eighth Schedule of the Constitution,” he added.

Thanking the supporters for reaching the glorious milestone of crossing 1 Lakh+ active members by his second visit, Banerjee said, “We started this membership drive with a few hundred; today, we have reached a humongous support of 1 Lakh plus active members in just four months. I thank each one of you for ensuring our progress in the quest to stand out.”

On the second day of his two-day visit to the Garo Hills, Banerjee met the Roman Catholic Bishop of Tura, Andrew R. Marak, in the morning.

Tura is one of the most prestigious seats in the 60-member Assembly in Meghalaya. It was once the home-turf of former Lok Sabha Speaker and founder of NPP. The NPP is leading the MDA government with Conrad Sangma, the youngest son of the former Speaker, as Chief Minister.

Conrad’s brother James Sangma is a cabinet minister in the MDA government, while his youngest sister Agatha Sangma is a member of the Lok Sabha.

Political observers said that the NPP is slowly loosening its grip in Garo Hills. Conrad who is representing the prestigious South Tura assembly is facing a strong challenge from BJP’s Bernard Mark.

Addressing the crowd, Meghalaya TMC State President Charles Pyngrope said, “The TMC believes in the power of the people and aspires for better governance. We are working for the development of Meghalaya and would strive to make it a model state”.

Former Chief Minister Dr. Mukul Sangma said, “We are a party which stands for justice. We will not compromise with our ideologies and principles”.

Resonating with Banerjee’s message, Sangma said, “We aspired for Meghalaya to become the hub for travel and education. Instead, it has become a hub for gaming and gambling under the MDA government. We want immediate redressal to restore the state to its lost heritage.”