84 leaders of CPM, BJP and TMC joined Congress in Tripura 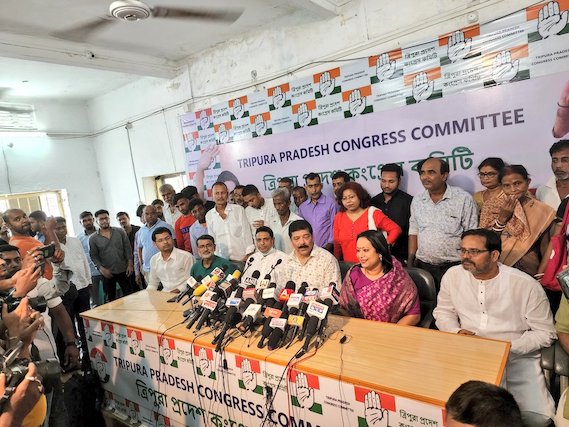 Agartala: The ruling BJP and main opposition CPI-M received a jolt on Wednesday as 50 front line leaders of CPI-M, 25 from BJP and nine from Trinamool Congress in Dharmanagar in North Tripura have joined Congress raising a call to defeat BJP in next assembly elections.

The leaders after joining Congress told the media that the BJP-IPFT rule in the last 52 months has suffocated the public life and the development of the state was stalled. Relentless corruption, violence and attacks on opposition supporters and democratic institutions became a daily routine but, CPI-M and Trinamool Congress failed to resist the unruly BJP.

In Tripura, Sudip Roy Barman, Ashis Saha and Birjit Sinha are the only political leaders who have been well accepted by the common people and the person distressed cutting across political affiliation remembers them whenever they face any crisis. Barman and Saha deserted BJP and joined Congress; BJP miscreants have stepped back from their strategies and are now counting their days, stated Chayan Bhattacharjee.

“We found safe and secure politics in Congress with those leaders. At least nobody can stop our democratic activities and common people would encourage speaking out against the misrule of BJP,” Bhattacharjee claimed adding that no other party except Congress can restore the lost glory of India, which has been eroded under Modi’s rule.

Later, Roy Barman asserted that many leaders of other parties including MLAs from ruling front would join Congress very soon and reiterated, “We are identifying the Motorbike borne miscreants of BJP in every location and their days are numbered only. I want police to act as per law and if anybody wants to disturb the ongoing by-poll or trigger violence like last Urban local bodies election – people will not spare them anymore.”