The causalities may rise further as the rescue operation was ongoing, Sinarimbo added. 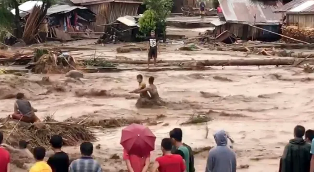 Manila: At least 31 people died on Friday and more others were missing after a strong overnight downpour flooded a number of towns in Maguindanao province in southern Philippines, a local official said.

The causalities may rise further as the rescue operation was ongoing, Sinarimbo added.

Local media reported that the heavy rain was related to the tropical storm Nalgae which is expected to make landfall on Sunday on the main Luzon island.

According to the Philippine Atmospheric, Geophysical, and Astronomical Services Administration, Nalgae is expected to strengthen into a severe tropical storm on Friday and into a typhoon by Saturday.