In a statement here, Idol Wing DGP Jayanth Murali said the Bible was an exhibit in 400-year-old Saraswathi Mahal Museum in Thanjavur from where it went missing in the year 2005. 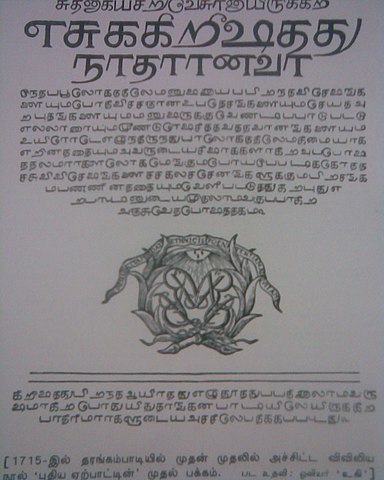 Chennai: The Idol Wing CID of the Tamil Nadu police force today said it has traced the world’s first printed Tamil Bible , a 300-year-old antique , which went missing from a State Museum in October  2005, has been traced to King’s Collections, London.

In a statement here, Idol Wing DGP Jayanth Murali said the Bible was an exhibit in 400-year-old Saraswathi Mahal Museum in Thanjavur from where it went missing in the year 2005.

“We have started communications with the King’s Collections in London and we will be positively getting the antique Bible back soon, he said.

Bartholomaeus Ziegenbalg, a missionary, worked in South India after his studies at the University of Balle reached Tharangambadi in September 1706, along with Heinrich Plueshau from Denmark as the first Protestant missionaries in that country.

He soon set up a printing press and published studies of the Tamil language and Indian religion and culture. His translation of the New Testament into Tamil in 1715 and its first printed copy was handed over to Tulaji Raja Serfoji by another missionary named Schwartz after the death of Ziegenbalg in 1717.

The Bible, an antiquarian book, was exhibited at the Saraswati Mahal Museum.

On 10 October 2005, the Deputy Administrator of the Serfoji Palace filed a complaint with the Thanjavur West Police station that the antique Bible was missing.

In October 2017, Idol Wing CID received a complaint on the disappearance of the Bible from Saraswathi Mahal from one E Rajendran, who gave a complaint which led to the registration of a case of theft and the investigation was taken up by a Special Team to trace it.

The Team on perusal of the visitor’s register revealed that there had been some foreign visitors to the museum on October 7, 2005, the day Bible went missing, Jayanth Murali said.

Further enquiries revealed that these visitors had come to India to participate in a function to commemorate Bartholomaeus Ziegenbalg, the Danish missionary.

When the suspicion pointed out to the foreign visitors the wing launched a search of the websites of various museums in the world, as also Collector’s websites and organisations connected with Bartholomaeus Ziegenbalg.

After several days of browsing multiple websites of various museums abroad, the Idol Wing stumbled upon the collection of English King George III which included thousands of printed books, manuscripts and pamphlets, most of which are rare with antique value.

Hidden among the thousands of books, the Idol Wing discovered the stolen Bible, the first translated antiquarian Bible in Tamil that was printed in a printing press at Tharangambadi in the 17th century with the signature of Rajah Serfoji of Thanjavur himself.

The antiquarian Bible that was available on the website of the Kings Collections tallied with the picture of the stolen Bible.

Further enquiries with the concerned confirmed our findings. The Idol wing hopes to retrieve the Bible and restore it to the Saraswathi Mahal library under the UNESCO treaty soon, he said.