The Governor said, the youth of Manipur have an inborn talent for games and sports and by dint of this quality they can shine in various sports events including fencing 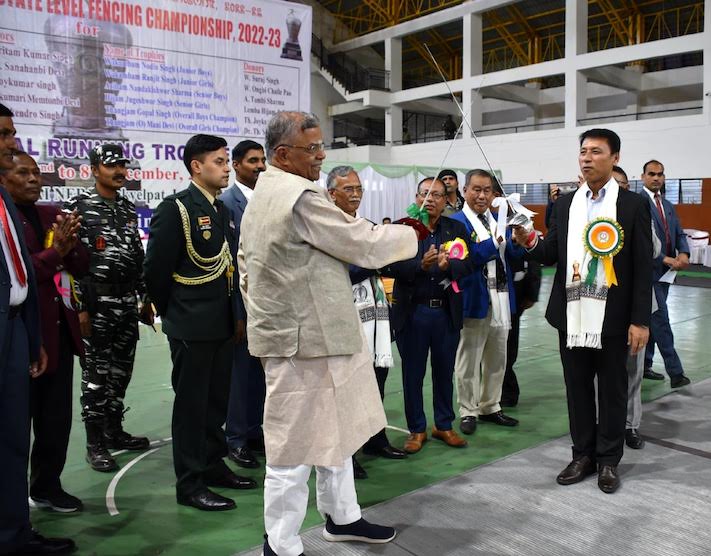 Speaking at the opening function, the Governor said, the youth of Manipur have an inborn talent for games and sports and by dint of this quality they can shine in various sports events including fencing.

He said, some of them have displayed their outstanding activities even at the international level and they are icons in their respective fields. We are really proud of them, as such, we all should always appreciate and support our sportsperson in order to accelerate the sports movement in the State.

The Governor further said, the game of fencing is now gaining popularity in our country and in Manipur too. He said, in the recently held National Games, 2022 in Gujarat, the Manipur Fencing team displayed their superiority by winning 1 gold, 1 silver and 4 bronze medals, which is a highly remarkable achievement in this sport.

Manipur has produced a good number of fencers and they have brought prestigious medals in a number of national and international competitions. Credit for all this achievement goes to the Manipur Fencing Association and Fencers.

Stating that games and sports play an important role in moulding the character of the youth and in building the strength of a nation, the Governor said, it also promotes discipline, fellow feeling and social harmony. Governor also expressed hope that the Championship will provide a good opportunity for healthy competition and ultimately will help strengthen the bond of friendship and brotherhood among the various sections of the people of Manipur.

Th. Radheshyam Singh, MLA and President of Manipur Olympic Association said, Manipuris have inborn sporting talents and therefore we have a number of good players in many sporting disciplines. He said, fencing is like Thang–Ta and it is best suited for our youths and they have been doing well in many national and international competitions, he added.

Fencers from Chandel, Imphal East, Imphal West, Senapati, Thoubal and Ukhrul will compete in different categories in the Championship.