For the first time during the 50-month rule of the BJP-led government in Tripura, the state has filled up its full quota of ministers, ie 12. 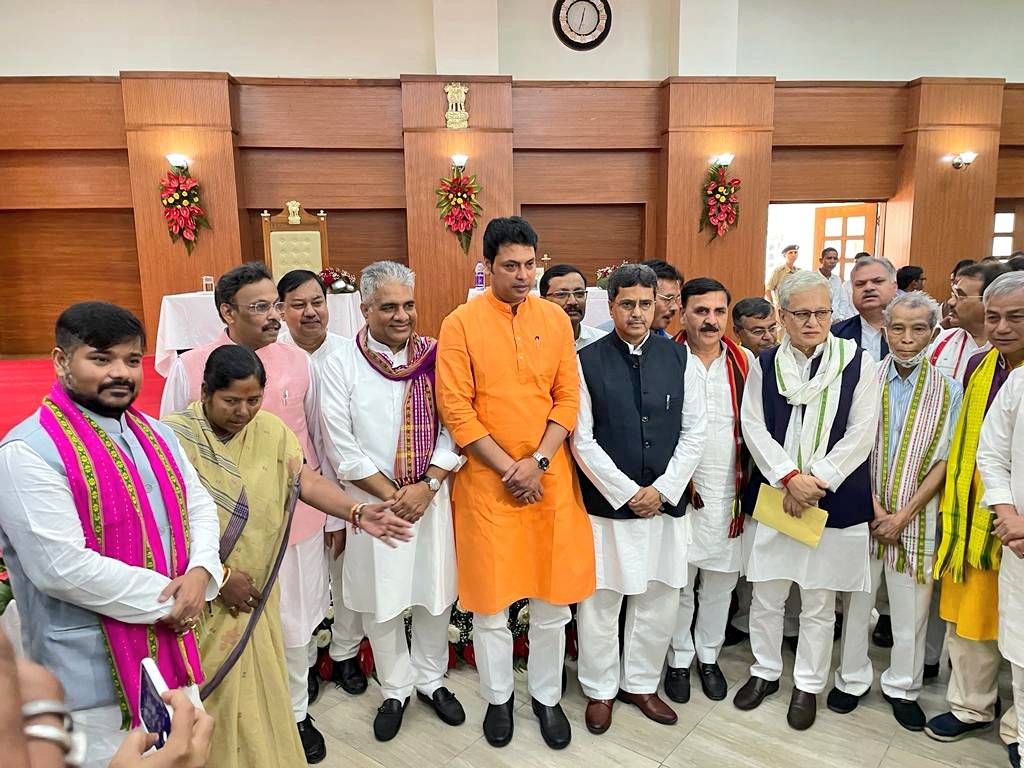 Agartala: A day after taking charge as 12th Chief Minister of Tripura, Manik Saha inducted 11 ministers including two from BJP’s ally Indigenous People’s Front of Tripura (IPFT) in his cabinet on Monday.

Governor Satyadeo Narain Arya administered the oath of office and secrecy to all the ministers at an austere ceremony in the Raj Bhawan here.

Among those present were BJP’s central leaders including union environment and climate change minister Bhupender Yadav.

While nine members of the cabinet have been chosen from the previous council of ministers led by then Chief Minister Biplab Kumar Deb, two new faces – one each from BJP and the IPFT – were inducted in the cabinet. Also, Saha himself has never been a minister earlier.

For the first time during the 50-month rule of the BJP-led government in Tripura, the state has filled up its full quota of ministers, ie 12.  All 12 berths of the council of ministers had never been filled up during Deb’s tenure despite continuous pressure from the MLAs of the BJP and the IPFT.

Deb was sworn in as Chief Minister on March 9, 2018 with eight ministers and after 13 months Health Minister Sudip Roy Barman had to resign after raising his voice against Deb.

But the then CM didn’t take any replacement, and continued with seven ministers, leaving five berths vacant. Finally, on August 31 last year three new ministers were inducted, but still one berth remained vacant.

In contrast, Saha has constituted his full cabinet with former Deputy Chief Minister Jishu Dev Varma, after initially showing his unhappiness over being bypassed for the top post, took his oath during the day.

The 12th berth of the cabinet which was left vacant for the last 50 months after BJP-IPFT came to power, has been filled up with veteran saffron leader Rampada Jamatia.

Congratulating the cabinet members, Saha said, “I will distribute the portfolio among the ministers soon and the government will work with a mission to serve the last man of the society without any discrimination and bias.”