The four-day festival will be held at the Jawaharlal Nehru Stadium in the national capital after a two-year hiatus due to Covid-19 induced lowdown. 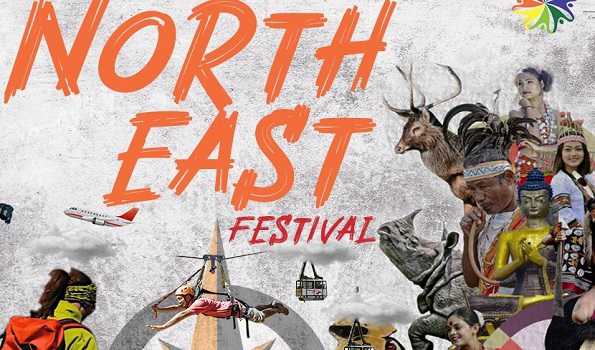 New Delhi: The stage is all set for the 10th edition of the North East Festival to be held here beginning on Friday.

The four-day festival will be held at the Jawaharlal Nehru Stadium in the national capital after a two-year hiatus due to Covid-19 induced lowdown.

The carnival will be inaugurated by Union Minister for Micro, Small and Medium Enterprises Narayan Rane.

The first seven editions were organised from 2013 to 2019 respectively at IGNCA, Janpath here. The last two editions were held in Guwahati, in a hybrid model, due to the spike in Covid cases in the national capital.

Ever since its inception in 2013, this festival has contributed a lot in boosting tourism in the Northeastern states.

A North East Rock Battle will be organised with top rock bands from across India vying for the title, it said.

As many as 50 food stalls will showcase diverse cuisines not only from Northeast India but across Delhi-NCR to encourage cross-cultural awareness and exchange, it added.

An exhibition displaying ‘Made in North East’ products, will have an MSME zone, wherein more than 100 MSME entrepreneurs of North East India will showcase agri-horti products, handloom, handicrafts, processed food products and much more.

“Dozens of stalls will come up for this exhibition to create a marketplace wherein visitors can explore and buy authentic products from the region”, said the organisers.

Moreover, tourism stalls will be put up to promote the region’s popular and off-beat places, they said.

A B2B Tourism Meet will be held in which stakeholders from the North East will interact with leading tour operators.

A B2B Meet on Agriculture by APEDA will also be organised wherein agro entrepreneurs from the North East will get the chance to interact with prominent buyers from Delhi-NCR.

Fashion designers Meghali Das and Arbin Tonjam will put up their haute couture ensembles to be donned by top models, who will walk the ramp to the accompaniment of electrifying fusion of folk and rock music. Collections from fashion brands such as Maxwell, Baru, Rosemary, Adriana, Sampriti Goswami will be on display.

A booklet titled ‘Know Your North East’ will be released by Union Minister for Ports, Shipping and Waterways and AYUSH Sarbananda Sonowal.

The event will come to a close on December 26 with Union Minister for Tourism and DoNER G Kishan Reddy gracing the valedictory session.

Chief Organiser of North East Festival, Shyamkanu Mahanta, said, “After two years of lockdown, we are elated to be back to our favourite place, Delhi, the city which has always showered love on us profusely.”

“The USP of this festival is the way in which we seamlessly integrate elements of social cohesion, cultural heritage, and economic welfare, making it truly an immersive experience for all.”

Mahanta further said that the annual event in the national capital has been able to sensitise people about the region vis-a-vis the need to recognise and respect its opulent and diverse heritage.

“People are now aware of our culture and traditions, and that has helped in bringing down racism, racial discrimination, and xenophobia – major issues confronted by North East people. This time around, we’ve chosen a much bigger venue, thus expecting greater visitors’ footfall,” the Chief Organiser quipped.