Yechury calls for a united fight against BJP from Tripura

He apprehended that BJP might have resorted to violence, intimidation of voters, and booth capturing like all previous elections in Tripura during BJP’s rule to return to power once again and advised, “Not to fall prey into any of their evil design and resist all undemocratic attempts unitedly to save the future of Tripura in coming elections. 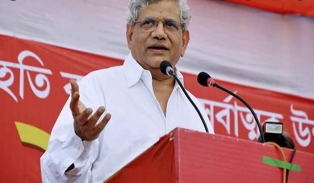 Agartala: The CPI-M General Secretary Sitaram Yechury on Friday while addressing a mammoth rally here called for a united fight against the ruling BJP-IPFT government in the upcoming assembly election in Tripura to restore democracy and roll back the economic prosperity, which has allegedly been destroyed over 55 months by BJP.

He said the way the horse of Ashvamedha in Ramayana was prevented by two brothers Lav and Kush, in a similar manner Modi will be shunted out by two brothers of the nation – Kishan (farmers) and Mazdoor (laborers) in the 2024 general elections. But after three months Tripura is going to hold an assembly poll where two brothers – tribal and non-tribal need to fight against BJP to rebuild communal harmony.

“In BJP’s rule, Tripura has been witnessing violence and hatred among the people of the state only because the majority of common people don’t subscribe to the ideology of BJP. None of the commitments of development made by the party before coming to power was fulfilled, instead, they are trying to fool the people by claiming they implemented almost all”, Yechury pointed out.

He apprehended that BJP might have resorted to violence, intimidation of voters, and booth capturing like all previous elections in Tripura during BJP’s rule to return to power once again and advised, “Not to fall prey into any of their evil design and resist all undemocratic attempts unitedly to save the future of Tripura in coming elections. The state had a past glory of peaceful elections in festive mode during the left front regime but now under BJP elections have turned into a horror.”

The Narendra Modi government has given tax relief of Rs 11 lakh crore to the corporates in eight years, which severely affected the development process of the country and now India is reeling under economic crisis because of pro-rich policies of BJP led government at the center, Yechury alleged adding that people of the country assembled to oust such an anti-people government from the power in next elections and it would start from Tripura in next February.

Meanwhile, Politburo member and leader of the opposition Manik Sarkar alleged that 55 months of the rule of BJP-IPFT has pushed Tripura near to a ditch in all parameters.

The power surplus state and profit-making electricity corporations become poor. The employees are not getting their regular benefits, no new jobs, and no work for the poor people, and, a model state has been reduced to a bagger by BJP.

“Parties would fight their elections as per their strategies, choice, and ideology but I appeal to the voters not to get cheated again by lucrative stories of BJP. Let us join hands to restore the lost glories of Tripura and establish a pro-people, democratic, and development-oriented government. People have already experienced the tall-talking government, which always works for a partisan interest ignoring the constitutional mandate,” Sarkar added.