In 2009, Kumari was attracted towards revolutionary speeches and acts of distribution of lands to the landless by the Maoist party. 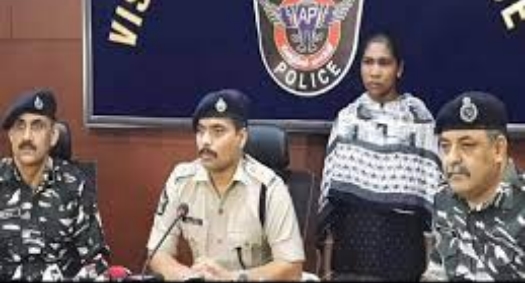 Kumari, an Area Committee Member (ACM) of the Pedabayalu Dalam of the outlawed CPI (Maoist), is a native of Mettaguda village under Gudem Kotha Veedhi in Visakhapatnam district.

She was involved in 46 offences including six murders, five exchange of fires (EoFs) and two blasts, according to B Krishna Rao, Visakha Rural Superintendent of Police.

In 2009, Kumari was attracted towards revolutionary speeches and acts of distribution of lands to the landless by the Maoist party.

Her uncle and senior leader of Maoists Gemmili Jambri, Galikonda Dalam Commander Krishna and Vasantha Kumari had motivated her to join the militia in the Galikonda area in 2009. Subsequently, she was elevated as Dalam member in 2010 and ACB in 2015. Since 2015, she has been working as ACM in Pedabayalu Dalam and was given an SLR weapon.

The SP said, “The reasons for her surrender include the dominance and high-handedness of non-tribal leaders, death of her colleagues in the recent encounters, and persistent combing operations by the police and a few other reasons.”

According to the surrendered Maoists, she had met Maoist top leader Akkiraju Haragopal alias RK in 2019 in Vizag Agency.
She said, most of the Maoists are struggling to get treatment for illness and the deaths of RK and Kudumula Ravi was due to acute illness and no medication.

“The Maoist leaders did not provide proper medical care to their cadre and hence they surrendered for a better life,” she added.