Similarly, leaders of the Bharatiya Janata Party (BJP) and the United Democratic Party (UDP), the two key partners of the NPP-led Meghalaya Democratic Alliance (MDA) government are making all efforts to ensure victory to their respective party candidates. 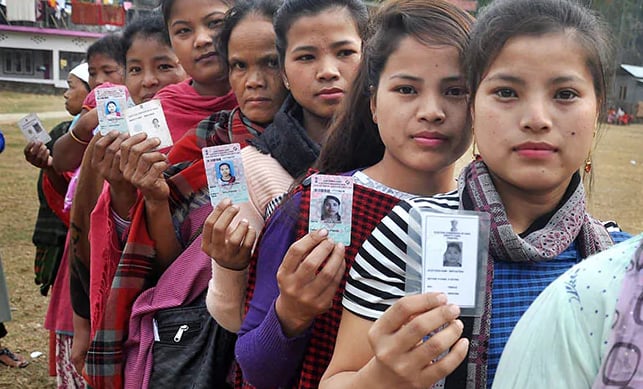 Shillong: With only two days remaining for the campaign to the bye elections to be held in three assembly seats in Meghalaya on October 30, the ruling National People’s Party (NPP), opposition Congress and other parties have intensified their public meetings to woo the voters.

Similarly, leaders of the Bharatiya Janata Party (BJP) and the United Democratic Party (UDP), the two key partners of the NPP-led Meghalaya Democratic Alliance (MDA) government are making all efforts to ensure victory to their respective party candidates.

The by-elections were necessitated, following the demise of three sitting legislators David A Nongrum of Mawryngkneng, Dr Azad Zaman of Rajabala (both Congress) and Independent legislator, Syntar Klas Sunn of Mawphlang.

The stakes are high for both the ruling NPP and opposition as the victory in the by-polls would only embolden the respective parties ahead of the assembly elections in the State in 2023.

“We are confident to win in all the three seats, and the response we’re getting from the electorates show that the people are disappointed with the government in handling several issues concerning the state,” senior Congress legislator Dr. Mazel Ampareen Lyngdoh said, and added that the anti-incumbency factor will help Congress party candidates win the by-election. The opposition Congress fields Highlander Kharmalki from Mawryngkneng, former legislator Kennedy C Khyriem from Mawphlang and Hashina Yasmin Mondal from Rajabala seats as its candidates.

Asked if the by-poll is an acid test for both the ruling parties and opposition Congress, Lyngdoh said, “I am not calling it a test , I am calling it an opportunity for the Congress to be able to find a platform to discuss the issues affecting before the State. The test is for the government. Why would the opposition want to be in the test. We have nothing to lose. It is they (Government) who have something to lose but we have all to gain.”

Voicing optimism that the ruling NPP will win hands down, Meghalaya NPP president, Dr. Wanwei Roy Kharlukhi said, “We are very confident to win and we are winning in all the three seats . There is no anti-incumbency factor against NPP and the opposition Congress keeps dreaming on all factors . We are working on the ground and we know what the situation is.”

The NPP fields the curent Chairman of Khasi Hills Autonomous District Council (KHADC) Pynïaid Sing Syiem from Mawryngkneng, four-time sitting KHADC member, Lamphrang Blah (who left the Congress) from Mawphlang, and former legislator, Abdus Saleh from Rajabala seat.
He added, “We have been working very hard. We have done a lot of developmental works and people have been seeing it,” Kharlukhi said, adding that there are issues and concerns which every government has and faces.

Rubbishing Congress’ allegations of “disunity” within the MDA coalition government, Kharlukhi said, “The Congress should look at themselves and asked whether they are united. We have seen the reaction of (Congress Legislature Party leader) Dr. Mukul Sangma when (Shillong Lok Sabha member) Vincent H.Pala was appointed as State Congress president. Therefore, it is important for the Congress to put their house in order first and should sort out their differences rather spreading rumours against the MDA.”

“Last time, we won the Assembly by-elections from Shella and Ranikor and even the by-election to Khasi Hills Autonomous District Council from Langrin constituency. This time too, we are hopeful of winning the by-elections in Mawphlang and Rajabala constituencies,” UDP General Secretary, Dr. Jemimo Mawthoh said.

Mawthoh hoped that the NPP candidate from Mawryngkneng constituency will win the by-poll.